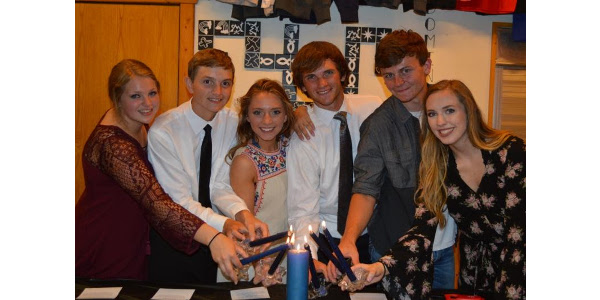 HURON, S.D — What is an everyday hero? This was a question considered by campers during the 2017 S.D. Farmers Union State Leadership Camp as they elected a six-member Junior Advisory Council (JACs).

“This year I really hope that campers take away the importance of being someone’s everyday hero,” explains Rachel Haigh-Blume, SDFU Education Director. “You can have a large impact on your neighbors without having to spend a lot of money. Our time at Feeding America hopefully showed the campers how much you can accomplish together in little time.”

During the 2018 South Dakota Farmers Union State Leadership Camp, the council members, elected by their peers, will fill the role of everyday hero as they are molded into leaders in the eyes of younger campers.

Apart from serving as exemplary role models to fellow campers, the council will plan, implement and guide the 2018 State Leadership Camp and help with Farmers Union events across the state of South Dakota.

The Junior Advisory Council will have the challenge of developing camp activities that showcase the importance of representing South Dakota Farmers Union in a positive light in their own unique way.

Along with how they showcase their passion for Farmers Union in everyday life, JACs were asked how they plan to foster an atmosphere that reassures campers it’s OK to break out of their shells and be themselves.

“JACs’ relate-ability with every camper, from the first-year attendee, to the senior attendee, impacts a camper’s experience. So, their ability to talk and check in with campers is important,” says Haigh-Blume.

In their own words
Junior Advisory Council members will begin their new role with important lessons in mind, focusing on the experiences of other campers and doing little things to become everyday heroes in the lives of the people around them.

The council members will learn important team-building and time management skills which they will carry with them long after their years at camp end.

Jim Brockel, 17, is the son of Kelvin and Jean Brockel. He attends Bison High School. He looks forward to being a member of the close-knit council and making camp fun for others. He values his time at camp and coming back and seeing the friends he has made over the years “There are a lot of really cool people that you meet through Farmers Union.
That’s probably the most passionate thing for me,” says Brockel.

He looks back on his own experiences as a new camper and hopes his lessons learned will help new campers get involved.

“I see it a lot of young people scared, I mean, I was,” says Brockel. “I was lucky, some older campers showed me the ropes and pushed me to do things. I was nervous but that’s what you have to do. When older campers tell you to do stuff, it’s going to be worth it. It’s going to be fun. That’s how you bust out and get to be having the best time at camp.”

Dalton Gerlach, 17, is the son of LaRon and Roxann Gerlach. He attends Corsica-Stickney High School. Having other campers look up to him the way he looked up to past JACs is what motivated him to run for the council.

“I just like meeting new people and so I go out every day and meet everyone at my school and talk to them just like I do here,” says Gerlach.

He recalls not being the most talkative person at camp his first year and hopes to help others find their voice.

“I would pull them aside and kind of tell them how I broke out of my shell,” says Gerlach.

Marissa Holinka, 17, is the daughter of Rick and Gwen Holinka. She attends Watertown High School. She looks forward to representing her peers and promoting youth activities with Farmers Union.

“It’s honestly a no judgment zone, everyone loves everyone here. It’s a family,” says Holinka. “If someone is struggling to break out of their shell, I would say to find someone that you can get along with and keep broadening your friend group and including other campers.” She plans to help promote Farmers Union so others can build strong lifelong friendships like she has.

Haley Keizer, 17, is the daughter of Lance and Miranda Keizer. She attends Corsica-Stickney High School. She looks forward to meeting new friends and being a leader among new campers.

“What makes me passionate about Farmers Union, is all of the things we get to experience at such a young age. Getting to come to this camp, we learn how to be leaders and all of the friends we make,” says Keizer.

She encourages all the campers to be themselves and to look forward to the lifelong friends they will make.

“I would show new campers that everyone is really themselves here at camp, no one judges who you are,” says Keizer. “Everyone finds friends, someone like them and they become best friends ­ for life basically.”

Joseph Nugteren, 17, is the son of Darin and Lisa Nugteren. He attends Canistota High School. He hopes to be a positive influence on new campers so they continue to come back in the future and grow as individuals.

“My family makes me passionate about Farmers Union. It’s always been a part of our family and I love coming here,” says Nugteren.

He would try to include other campers in everything and let them know how nervous he was his first year.

“A lot of things we do help them break out of their shells,” says Nugteren.

“We were nervous too right when we started but came out of our shells because it’s family here and we are all in this together.”

Hannah Sumption, 17, is the daughter of Eric and Stacey Sumption. She attends Frederick Area High School. Her passion for Farmers Union was sparked by her grandparents, John and Margaret Sumption, who encourage her to stay active and involved in the organization.

“My grandparents have been involved for as long as I can remember,” says Sumption. “The foundation that we are based on, it’s family, being a cooperative, helping each other out, giving a little and getting a lot or giving a lot and getting a little, but either way, you support each other through no matter what.” She understands the importance of relating to and including other campers so everyone has the best experience possible.

“I just encourage you to go out and introduce yourself, make it funny, don’t sit in the corner by yourself and if someone is sitting in the corner by themselves, go talk to them because chances are, they might be going through something and maybe you could help them get through that,” says Sumption.

Health survey for farmers and ranchers