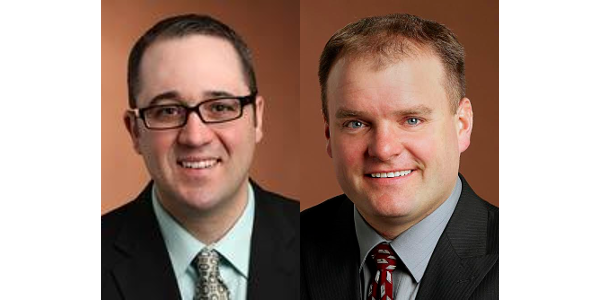 SIOUX FALLS, S.D. — The South Dakota Corn Growers Association presented Presidential Service Awards to Keith Alverson of Chester and Reno Brueggeman of Miller. Alverson is president of the association and Brueggeman is president of the South Dakota Corn Utilization Council. Both men will complete their presidential eligibility at upcoming board meetings but will continue to serve as directors on their respective boards.

Alverson was elected to the SDCGA board in January 2010 and served the past three years as president. He served on the SDCUC board from 2007-2010. He also serves on the National Corn Growers Association board of directors. He grows corn and soybeans in a farming partnership with his dad and uncle near Chester.

Brueggeman joined the SDCUC board in 2013 and has served two years as council president. He and a brother are involved in a diversified farming operation that consists of corn, soybeans and wheat.

The SDCGA was founded in 1986 and works to improve producer profitability, influence public policy and increase corn usage.

The SDCUC is responsible for the collection and administration of a one-cent-per-bushel corn check-off program. Money raised through that program funds promotion, education, research and development of new uses and markets for corn and corn byproducts.