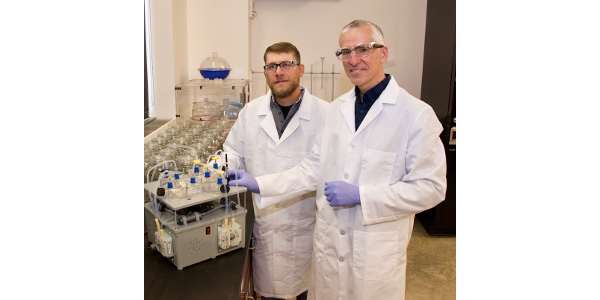 Iowa State University professor Jacek Koziel (right), agricultural and biosystems engineering, and research collaborator Devin Maurer, with a prototype of their new tool that can dramatically speed detection of bovine tuberculosis by identifying the unique signature of gases different microbes emit over time. (Courtesy of ISU Extension and Outreach)

AMES, Iowa — A new screening tool developed by researchers at Iowa State University and the U.S. Department of Agriculture can dramatically reduce the time to detect strains of bacteria that cause a serious livestock disease and that impact the health of millions of people worldwide.

Bovine tuberculosis is a zoonotic disease — one capable of being transmitted from animals to humans. The disease is caused by infection with Mycobacterium bovis, a pathogen closely related to the one causing human tuberculosis.

The new tool collects extremely low levels of volatile organic compounds emitted by the bacteria, making it possible to differentiate between disease-causing and non-disease-causing strains of Mycobacteria, said Jacek Koziel, professor of agricultural and biosystems engineering at Iowa State. The device can be used to collect and analyze samples within hours, much quicker than current methods that often take up to eight weeks.

In addition to speeding up identification, the new testing platform is also portable and less expensive than tools typically used to test for bovine tuberculosis in the laboratory.

Bovine tuberculosis causes coughing and lung damage, often leading to death. It primarily affects cattle and white-tailed deer in the United States and can be transmitted to humans who come in contact with infected animals and their meat or hides, or unpasteurized dairy products. Other mammals, including bison, elk and feral and domestic swine are susceptible.

Human tuberculosis is generally linked to a different species of bacteria. However, about 30 percent of human cases worldwide – out of an estimated 9.6 million total new cases (in 2014) – are linked to bovine tuberculosis. These cases represent an estimated 200-300 human TB cases annually in the U.S. and millions in developing countries where the disease is more prevalent in cattle.

Bovine tuberculosis often goes underreported and can spread widely. The course of the disease is slow, and a sick animal can infect others before symptoms start to show. Disease transmission can also occur during the long incubation time current testing procedures require to culture and identify the bacteria.

“That’s why the speed of the new lab-scale method is so valuable,” said Koziel. “This is an important step towards an accurate, real-time screening device for these diseases.”

The new tool uses a biosecure, closed-loop circulating airflow system to collect the volatile organic compounds from growing bacteria in lab cultures. The collected samples are then analyzed using detailed statistics and other methods to identify the unique signature of gases different microbes emit over time.

“This ability to detect the evolution of disease ‘fingerprint’ volatiles is something that current methods cannot provide,” said Koziel.

“The tool was developed with many materials we had on hand,” he said “with support from collaborators who believed in the idea and knew it could be an important advance.”

Koziel worked with Devin Maurer, a research associate in agricultural and biosystems engineering at Iowa State who now works in industry. “Devin had the unique blend of practical skills, interest in livestock and knowledge that made it possible to create this ingenious device,” said Koziel. They collaborated with Christine Ellis, then an APHIS Research Fellow at USDA’s Animal Plant Health Inspection Service National Wildlife Research Center in Fort Collins, Colorado, and Tyler Thacker, a research microbiologist affiliated with the USDA Agricultural Research Service National Animal Disease Center in Ames.

“I hope this leads to more in-the-field, quicker response screening tools to help control the spread of livestock disease,” said Maurer. “It also has potential to be adapted to help diagnose other diseases — and even to fingerprint environmental, forensic or pharmaceutical specimens that you might want to limit direct contact with.”

The tool is not yet ready for widespread use, but Koziel expects it could soon become part of a standardized test. To take it to the next step, he said, “additional side-by-side cross-check testing with ‘gold-standard’ current methods is still needed.”

Research findings on the new sampling tool were featured in the August issue of Scientific Reports, a peer-reviewed publication, in the article, “Screening of Microbial Volatile Organic Compounds for Detection of Disease in Cattle: Development of Lab-scale Method.” Maurer is the lead author with coauthors Koziel, Ellis and Thacker, and also Pauline Nol and Kurt C. VerCauteren, with the USDA-APHIS National Wildlife Research Center; and Somchai Rice, an assistant scientist at Iowa State who worked in agricultural and biosystems engineering.

The new disease-screening tool was also featured in a presentation by Koziel at the recent International Conference on Sustainable Animal Husbandry in Poland.

Iowa to host Nat. Ag in the Classroom Conference