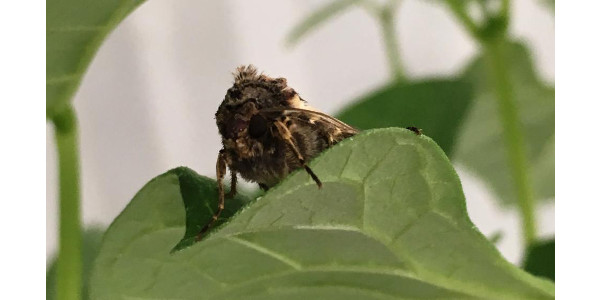 LINCOLN — The first western bean cutworm moths (Figure 1) were captured in University of Nebraska-Lincoln black light traps June 27 at Clay Center, June 28 at North Platte, and July 3 at Concord. Flights have been particularly heavy in south central Nebraska, with a steep increase in moth numbers in the Clay Center light trap since July 1 and reports of heavy egg-laying and hatching over the past week (Figure 2).

Egg masses have been reported on field corn in a variety of locations across the state, including Pierce, Howard, Fillmore, Platte, Clay, Adams, Phelps, Chase, and Dundee counties. As the moth flight continues and egg masses are laid in crops, it is essential to scout fields for the white to purple, dome-shaped eggs (Figure 3) and young larvae (see video).

Western bean cutworm moths overwinter in the soil as pre-pupae before pupating in late May and emerging as adults in late June or early July. Adults then mate and lay eggs in clusters of 5 to 200 on the top surface of the upper third of a corn plant. The eggs require five to seven days to develop, during which time the egg color changes to tan and then to purple immediately before hatching. Young larvae move vertically up the plant (see video) to feed on tassel tissue before moving back down to enter ears and feed on developing kernels (Figure 4).

If larvae hatch before corn tassels are available, survival will be very low. Leaf tissue alone is an unsatisfactory food source for young larvae. Young larvae that feed on late whorl plus tassel tissue are more likely to survive and weigh more than larvae raised on pollen, silk, and pollen plus silk. Once inside the corn ear, larger larvae (Figure 4) are protected from foliar applications of insecticides.

If western bean cutworm larvae hatch before corn tassels are available, survival will be very low.

Scouting for western bean cutworm should begin in field corn during the first 25% of flight. Control decisions should be made shortly after the moth flight peaks, usually in early to mid-July. (See the CW article: Using Degree-Day Models to Predict Western Bean Cutworm Flights.)

When scouting for western bean cutworms in corn, you can save time by using UNL’s speed-scouting mobile app or spreadsheet. Benefits include:

The app is available for iPad, iPhone, iPod Touch, and Android devices. The free app can be downloaded from the Apple App Store or Google Play by searching “western bean cutworm.” It is also available as a downloadable Excel spreadsheet, Western Bean Cutworm Speed Scouting, EC1585.

If you are not using the speed-scout tool, check 20 plants in at least five areas of each field. Look for eggs on the top surface of the upper most leaves and larvae in the tassel or leaf axils. Western bean cutworm moths prefer to lay eggs in corn plants that are in the late whorl stage compared to those that have completely tasseled. Pay particular attention to later planted fields or those with uneven development. Western bean cutworm eggs that hatch when corn plants are in the late whorl stage of growth have a high rate of survival. The larvae are well protected in the whorl or tassel and fresh tassels provide the best food source for early instar larvae.

If western bean cutworm eggs hatch when corn plants are in the late whorl stage of growth, survival will be high.

More information can be found in the NebGuide, Western Bean Cutworm in Corn and Dry Beans (G2013).

Two types of Bt proteins provide some protection against western bean cutworm: Cry1F and VIP3A. The Cry1F protein is present in products such as Herculex 1, Herculex XTRA, AcreMax, and SmartStax. When first introduced to the market, Cry1F provided approximately 80% control of western bean cutworm. However, recent research has shown that its effectiveness has decreased in some areas, such as parts of southwest and central Nebraska, in the last 10 years.

In regions where problems have been observed, it is recommended that fields with Cry1F products be scouted for western bean cutworm and insecticide treatment considered. Products that express the VIP3A protein, such as Agrisure Viptera and Leptra, provide effective control and should not need to be treated, although it is always advised to inspect Bt cornfields to ensure adequate efficacy. See the Handy BT Trait Table for a list of commercially available Bt corn hybrids and the proteins they express.

For corn hybrids that do not provide Bt control of western bean cutworm, consider applying an insecticide if 5%-8% of the corn plants have egg masses or larvae. If an insecticide treatment is warranted in corn, it should be made when 95% of the plants in a field have tasseled. This application timing increases the chance that larvae will be exposed to the insecticide, resulting in better control.

Carbamates (Sevin), organophosphates (Chlorpyrifos), spinosyns (Spinosad), methoxyfenozides (Intrepid), diamides (Prevathon), and many pyrethroids (51 commercial products) are labeled for control of western bean cutworm. Consider rotating mode of action in areas where pyrethroids have been heavily used for western bean cutworm and western corn rootworm control. The potential for resistance to common active ingredients such as bifenthrin and zeta-cypermethrin is a concern.

A list of registered insecticides, rates, preharvest intervals, and grazing restrictions is available in the Insect Management section of the most recent Nebraska Extension Guide for Weed, Disease, and Insect Management in Nebraska (EC 130) (starting on page 277).

The right way is the only way