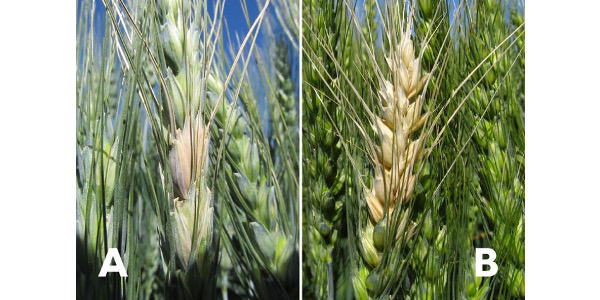 Symptoms of Fusarium head blight begin as bleaching of single or multiple florets or spikelets (A) or bleaching of whole portions of the head (B). (Photo courtesy of Kaitlyn Bissonnette)

Bissonnette says it is too late for many growers in southeastern Missouri to spray because wheat has passed the stage where spraying is recommended. Growers in southwestern, central and northern Missouri still have time to protect flowering plants.

The wheat crop in the Midwest is at moderate to high risk for the disease. Growers should monitor weather conditions carefully when wheat begins to flower and be prepared to apply fungicides, Bissonnette says. Currently, wheat development lags seven to 10 days due to delays caused by a late 2018 harvest, a lingering winter and cool spring weather.

FHB reduces grain yield and quality. Infected kernels shrivel, weigh less and can be contaminated with deoxynivalenol (DON), also called vomitoxin. Symptoms of infection generally begin 14-21 days after flowering and include bleaching of individual or whole parts of the wheat head.

An integrated approach to management includes selection of FHB-resistant wheat varieties and timely application of a fungicide to prevent disease when relative humidity is high and temperatures range from 75 to 85 F, conditions that favor FHB development.

No variety offers complete resistance to scab and the mycotoxins it produces, Bissonnette says, but some varieties are more resistant than others. Bissonnette says several labeled fungicides in the triazole class (FRAC 3) and a newly labeled multiple-mode-of-action product containing a triazole and an SDHI (succinate-dehydrogenase inhibitor, FRAC 7) provide effective control when applied at Feekes growth stage 10.5.1 (50% of heads are flowering). University research shows that a triazole fungicide applied up to five days after Feekes 10.5.1 may provide similar control.

Bissonnette says that strobilurin-containing fungicides are not labeled for control of FHB. If applied at later growth stages such as heading or early flowering, application could result in increased DON levels in grain.

The Fusarium Head Blight Prediction Center, a website hosted by Penn State University and supported in part by the U.S. Wheat and Barley Scab Initiative, offers state- and region-specific information about current and predicted risk of FHB. MU Extension contributes to this site. Go to www.wheatscab.psu.edu for daily risk map updates.