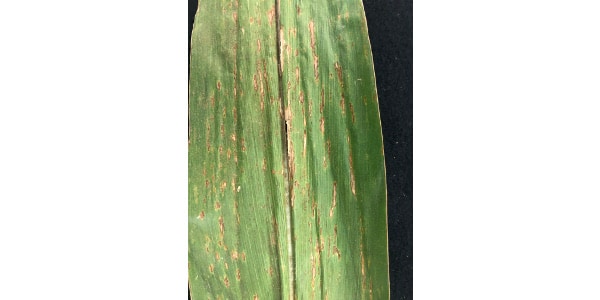 These diseases appeared for the first time in Missouri in 2019. They have caused severe economic losses in surrounding states.

Bissonnette offers facts and tips for growers to monitor their spread.

Found in Nebraska in 2014 and 2015, bacterial leaf streak (Xanthomonas vasicula subsp. Vasiculorum) spread quickly to surrounding states, but it did not reach Missouri until July 2019.

“Missouri is late to the game,” says Bissonnette. “Kansas, Nebraska, Iowa and Illinois have reported the presence of BLS for several years.”

Missouri reports two confirmed cases in 2019: one in west-central (Ray County) and one in north-central (Chariton County) Missouri. At least three more counties suspect its presence.

“It is critical to find where BLS is present since the pathogen overwinters on residues at the soil surface and on weedy hosts,” says Bissonnette.

Look for water soaking and long, necrotic lesions with irregular margins (see Figure 1). When leaves are backlit, a yellow halo is visible (Figure 2). Bacterial streaming is best seen under a microscope, so Bissonnette suggests sending samples to MU Extension for testing.

For more information, the Crop Protection Network publication “Bacterial Leaf Streak” is available for download at CropProtectionNetwork.org/resources/publications/bacterial-leaf-streak(opens in new window).

Bissonnette confirmed the presence of tar spot of corn in three northeastern Missouri counties (Scotland, Lewis and Clark) in fall of 2019. This fungal disease spread rapidly throughout the Midwest after it was first found in Indiana and Illinois in 2015.

Researchers know little about this disease, the pathogens that cause it or how to manage it, Bissonnette says. Researchers do see differences among hybrids, fungicides and cultural practices to control this disease where it is well established.

“Missouri is on the developing front of tar spot, so disease levels are currently low, making the focus on scouting and detection of new counties,” says Bissonnette.

“This pathogen overwinters on corn residue in the field and possibly on weedy hosts,” she says. “Tar spot often is confused with dirt on leaves, insect frass (excrement) or southern rust late in the season as the pustules turn black from a change in spore phases.”

It can appear anywhere in the canopy, but it generally shows in the lower canopy in fields with a history of disease.

In severe cases, plants senesce prematurely with significant yield loss. Sometimes there are tan “fish-eye” or tan diamond-shaped lesions surrounding the black raised dots (stroma) on leaves. Stroma can appear on a single leaf or multiple leaves, covering leaves, husks and ears. Stroma do not rub off with a fingernail and have not broken through the leaf surface like southern rust.

If you suspect BLS or tar spot, submit a sample to your county MU Extension center. For more information, contact Bissonnette at bissonnettek@missouri.edu. See updates on county confirmations on the Pest Information Platform for Extension and Education at corn.ipmpipe.org.

Benson Hill builds a home for the future of food
September 22, 2020