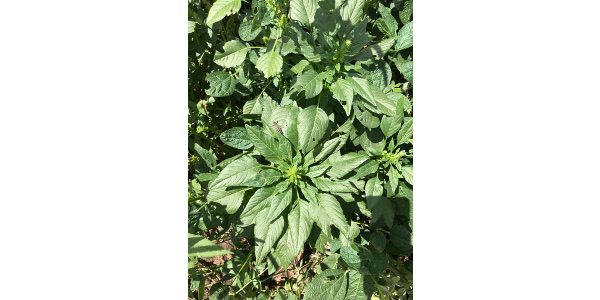 This Palmer amaranth plant is in the early stages of its development. (NDSU photo)

FARGO, N.D. — Palmer amaranth, the No. 1 weed problem in the U.S., hasn’t been spotted in North Dakota yet, and the state’s agricultural producers would like to keep it out.

It has been identified in two neighboring states, Minnesota and South Dakota, as well as in Iowa.

Palmer amaranth is a type of pigweed that has devastated crops in the South and Midwest, according to North Dakota State University Extension sugar beet agronomist Tom Peters. For example, it has reduced yield up to 91 percent in corn and 79 percent in soybeans.

Peters says this aggressive, competitive weed would pose a major threat to North Dakota crops because it can grow 2 to 3 inches per day in optimum conditions. The plants can grow to be 6 to 8 feet tall, and a single plant can produce up to 1 million seeds. Palmer amaranth also is hard to control because it is very prone to being resistant to herbicides.

Unlike other summer annual weeds that need to be controlled only through early summer, Palmer amaranth emerges throughout the growing season, notes Brian Jenks, weed scientist at NDSU’s North Central Research Extension Center near Minot.

The first step in managing Palmer amaranth is to look for it and identify it.

Now is a good time to scout because Palmer amaranth is developing its distinctive long, snaky seed heads, he says. The seed heads can grow up to 2 feet long.

Identifying Palmer amaranth can be difficult because it resembles redroot pigweed, smooth pigweed and waterhemp. Here are some ways to distinguish Palmer amaranth from similar-looking weeds:

Visit NDSU Extension’s Palmer amaranth website at https://www.ag.ndsu.edu/palmeramaranth to learn more about the weed and how to identify it.

Palmer amaranth seeds can spread in a number of ways, including farm equipment, wildlife, wind and water. Seeds also have been found in native seed mixes used for pollinator or wildlife habitats and in hay. Peters noted that a lot of donated hay came into North Dakota in 2017 because of the severe drought the state was experiencing, so producers need to be on the lookout for Palmer amaranth and other weeds.

People who see a plant they suspect is Palmer amaranth should contact their local NDSU Extension agent or an Extension specialist as soon as possible. Visit https://www.ag.ndsu.edu/extension/directory for contact information.

“This weed is a game changer and will be controlled only by a zero-tolerance policy,” Jenks says.