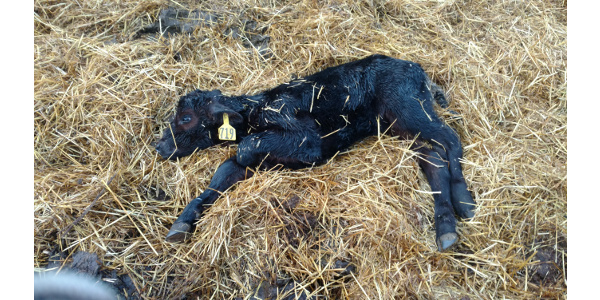 Scours can affect calves at any age, but those 3 to 16 days old are especially susceptible. (NDSU photo)

The majority of scours, or diarrhea, cases occur when calves are 3 and 16 days old. Untreated calves essentially die of shock from a loss of fluids.

There are a number of infectious causes of calf scours, both viral and bacterial. However, an organism called Cryptosporidium is a parasite that causes scours. Cryptosporidia usually is found in conjunction with other scour-causing bacteria or viruses.

“Unfortunately, this organism presents management problems as there is no vaccine or licensed therapeutic agent available,” Stokka says.

Inadequate nutrition for the pregnant dam, particularly during the last third of gestation, as well as the calf’s exposure to poor environmental conditions, insufficient attention to the newborn calf or a combination of these often results in scours outbreaks, he notes.

Not meeting the pregnant dam’s energy and protein requirements will decrease the quality and quantity of the cow’s colostrum. Colostrum is a form of milk that mammals produce in late pregnancy. It contains energy, protein, fat and vitamins, plus antibodies to protect newborns against disease until their own immune system is totally functional. Deficiencies in vitamins A and E, and trace minerals have been associated with greater incidence of calf scours.

Inadequate environment conditions, such as mud, overcrowding, contaminated lots, calving heifers and cows together, wintering and calving in the same area, storms, heavy snow, cold temperatures and rainfall are all stressful to the newborn calf and increase its exposure to infectious agents.

“Attention to the newborn calf is essential, particularly during difficult births or adverse weather conditions,” Stokka advises. “The calf is born without most antibodies, including those that fight the infectious agents that cause scours. The calf will acquire these antibodies only from colostrum. Because of this, any effort to prevent scours by vaccinating cows is wasted unless the calf actually receives colostrum, preferably before it is 2 to 6 hours old.

“As the calf grows older, it rapidly loses its ability to absorb colostral antibodies,” he adds. “Colostrum given to calves that are more than 24 to 36 hours old will be less than ideal as antibodies are seldom absorbed this late in life.”

Under range conditions, a calf adapts a pattern of nursing that fills its needs. Calf scours can be the result of anything that disrupts this normal habit, such as a storm, strong wind or the dam going off in search of new grass. When the calf eventually nurses, it is overly hungry and the cow has more milk than normal. This inconsistent nursing may lead to a condition known as enterotoxemia. The organism most often involved with this is clostridium perfringens of which there are several types.

The disease has a sudden onset. Affected calves become listless and strain or kick at their abdomen. Bloody diarrhea may or may not occur. In some cases, calves may die without any signs being observed.

“The key to successful treatment is identifying and successfully treating a dehydrated animal early,” Stokka says.

Calves that have lost significant amounts of fluid will have skin that “tents” (stays up for more than 3 seconds when you pull it away from the body), a dry mouth, cold ears and sunken eyeballs. They often have low blood sugar, low body temperature and low urine output, and have decreased blood electrolyte (sodium, potassium, bicarbonate, chloride) levels that adversely affect organ function, particularly the heart. They are visibly depressed.

The critical first step in treating cases of calf scours is correcting dehydration and electrolyte loss. Antibiotics can be administered if deemed appropriate by your veterinarian. Stokka recommends using a nipple bottle to replace the calf’s fluids if scours is detected early, when the calf still is standing and relatively bright.

“In these situations, it is best to leave the calf on milk and add several 2-quart electrolyte feedings a day to replace the fluid that is being lost through diarrhea,” he says.

Calves that are down but alert probably need to have fluids administered with a stomach tube. They will need 2 quarts of a high-energy electrolyte solution containing glucose several times a day. Producers may need to provide some heat source as well.

Calves that are comatose or lying down must be administered fluids intravenously.

Producers need to be thorough when replacing fluids in a scouring animal, according to Stokka.

“First of all, the amount of fluid lost must be replaced,” he says. “It is a common mistake to give the animal too little fluids. A 100-pound calf that is 10 percent dehydrated will need about 10 liters of fluid a day to just to replace fluid loss.”

“Also remember that many infectious agents that cause calf scours can cause disease in people as well,” Stokka says. “Wear gloves and wash your hands. When working with sick animals, treat them last, and wear dedicated coveralls and boots that can be washed.

“Individuals with any disorder of the immune system and pregnant women should not work with sick calves in any way as they are more susceptible to zoonotic disease,” he notes.