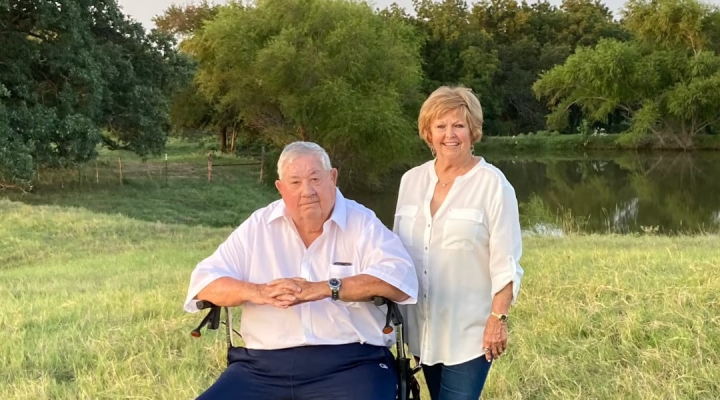 BOZEMAN, Mont. — Scott Riddle, Hubbard Texas, is a recipient of the 2022 World Simmental-Fleckvieh Federation Golden Book Award, which is the American Simmental Association’s (ASA) highest honor. Selected by the ASA Board of Trustees, recipients of this award are lifelong promoters of the Simmental breed. Riddle was recognized during ASA’s Fall Focus event, on Saturday, August 27, in Roanoke, Virginia.

With deep roots in the cattle industry dating back to 1841, Scott Riddle was among the earliest members of the American Simmental Association, holding number 16, the oldest active membership in the organization. An astute manager with a focus on the bottom line, Riddle immediately became interested when he heard about the big red and white cattle being imported to North America from Europe in the late 1960s. Believing that there would be a great demand for Simmental seedstock, he joined the ASA as a charter member and named his operation Simmentals of Texas (SoT).

Shortly thereafter, Riddle and a number of other early Simmental breeders gathered to form the Texas Simmental Association (TSA), later to become the Texas Simmental & Simbrah Association. Riddle served as an officer, on the board of directors, and on various committees during those early years. Along with several other Texas pioneers, he provided time, input, and financial support for the TSA, which was the first state Simmental association in the nation. Over the years he traveled to Germany, Austria, Mexico, and Canada in search of genetics to support his preferred breed.

In an effort to expose commercial cattle producers to the merits of the breed, he founded North American Simmental magazine, a breed publication that provided information to interested cattle producers while expounding the many benefits the breed could provide through crossbreeding. That magazine eventually served as a forerunner to the Simmental Shield and the Register.

After a half century of promoting the value of the breed as both a seedstock and a commercial producer, Riddle recently made the decision to purchase the prized Granbury-based Buzzard Hollow Ranch cow herd and contracted with former BHR manager Fred Schuetze to continue to head the program. That purchase brought the entire spectrum of SimGenetics — Full Fleckvieh, black and red purebred Simmentals, SimAngus, and Simbrah — to the SoT operation. It also included BHR Lady SIEG C235E, the only Fleckvieh Simmental female in the world with a complete DNA profile.

The Riddle operation continues as a family ranching institution to this day and includes his wife Pat, their two daughters Donna and Pam, and granddaughters Jennifer Cooper and Kathryn Batish.

Founded in 1968, the American Simmental Association is headquartered in Bozeman, MT. ASA is committed to leveraging technology, education and collaboration to accelerate genetic profitability for the beef industry. In keeping with its commitment, ASA, along with its partners, formed International Genetic Solutions — the world’s largest genetic evaluation of beef cattle.