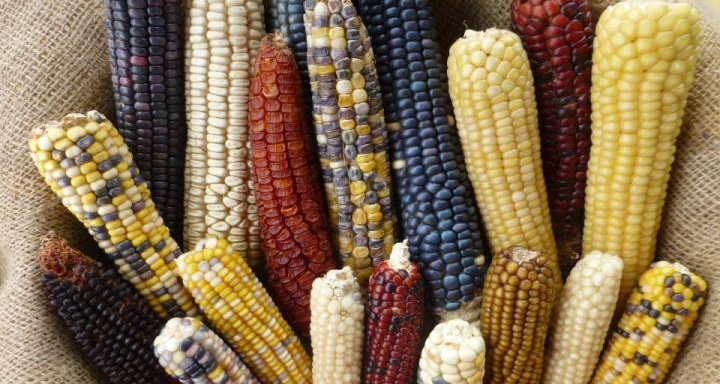 Maize diversity from the Native Seeds/SEARCH collection. This material relates to a paper that appeared in the Aug. 4, 2017, issue of Science, published by AAAS. The paper, by K. Swarts at Cornell University in Ithaca, N.Y., and colleagues was titled, "Genomic estimation of complex traits reveals ancient maize adaptation to temperate North America." (Native Seeds/SEARCH)

WASHINGTON — By analyzing ancient genomes of maize, scientists have found evidence suggesting that eventual agricultural use of the crop throughout the temperate highlands of the U.S. likely occurred due to propagation of varieties with earlier flowering times.

Maize was first introduced to what is the modern-day U.S. via Mexico roughly 4,000 years ago. People in the southern lowlands of the U.S. rapidly committed to maize agriculture – but it was another 2,000 years before the crop was widely grown at higher elevations. Kelly Swarts et al. suspected that this later adoption may have occurred due to the survival of certain varieties of the crop, which were better suited for the tougher growing conditions at high altitudes.

They reconstructed and analyzed the genomes of 15 ancient samples of maize, comparing these data to a global collection of more than 2,500 modern lines. By comparing the genetic information of the modern lines, the researchers were able to predict the flowering times of the ancient maize and traced the historical spread of phenotypes across various sites.

However, they found that the high-altitude varieties with slightly earlier flowering times – which were more useful and appealing to farmers at these more northern locations – probably did not come from what is modern-day Mexico; rather, the desirable phenotypes appear to be selected for by high-altitude farmers over thousands of years, the authors report.

–American Association for the Advancement of Science
via EurekAlert!