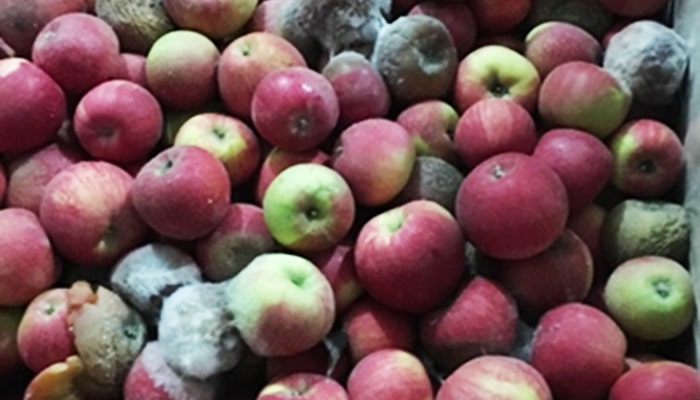 Off the tree, however, organic fruits are at the mercy of physiological disorders and fungi that can rot and destroy more than a third of the annual harvest before it gets to the table.

This fall, scientists at Washington State University are launching new research to find safe, organic-friendly ways to defeat post-harvest diseases and foodborne illnesses in apples and pears, while extending their storability.

Achour Amiri, a Wenatchee-based plant pathologist, is partnering with a team of scientists and students, including food safety and postharvest systems specialists, to test promising technologies using heat and controlled atmosphere in storage.

Funded by a four-year, $1.5 million grant from the USDA National Institute of Food and Agriculture’s Organic Agriculture Research and Extension Initiative, the team is also exploring safer fruit coatings and timely sprays to limit infection and preserve organic fruit quality.

Growers, currently, enjoy some organic treatments to keep fungi at bay in the orchard.

“Rots are their number one challenge to packing and storing fruit,” he added. “After five months, they can lose up to 50 percent of the crop just to rot.”

Thermotherapy, or heat treatment, is one alternative. High temperatures shut down and kill microbes, including decay-causing fungi. Thermotherapy has also been shown to keep fruits and other produce fresh longer.

“We need to find the optimal temperature to keep fruit quality and kill spores without damaging the fruit,” said Amiri, who will test heat’s effect on major fungal culprits, such as gray mold, bull’s eye rot, speck rot, and blue mold.

Apple, pear, and stone fruit varieties may have varied susceptibility to heat, so the team will test different cultivars to learn how to use thermotherapy safely.

Another approach involves changing the controlled atmosphere in which apples and pears are stored. Traditionally, temperature, humidity, and levels of oxygen and carbon dioxide are steadily maintained to slow the ripening process and keep fruit fresh.

“We’re hoping to show evidence that this can work in reducing decay and extending fruit quality,” Amiri said.

Fruit gives off gasses in storage. Scientists can analyze these exhalations to learn if fruit is under stress, which affects freshness and firmness and can cause other disorders. Amiri seeks to find the limit before stress begins.

The team will also test different spray materials made of biological agents, such as beneficial bacteria, and other safer ingredients that may combat rot-causing microbes.

“Different pathogens infect fruit at different stages of the production cycle, so timing is key,” said Amiri, who plans to test ingredients through the seasons to choose the most effective approach, as well as define the best harvest window for quality and disease defense. Starting field work next spring, he’ll partner with packers and farmers to ensure discoveries work in the real world.

Amiri is excited by the cross-disciplinary nature of the project, which connects experts in pathology with fruit quality, physiology, and food safety.

“We want to develop these technologies to cover other issues beyond rots, preserving fruit quality and improving safety,” he said.