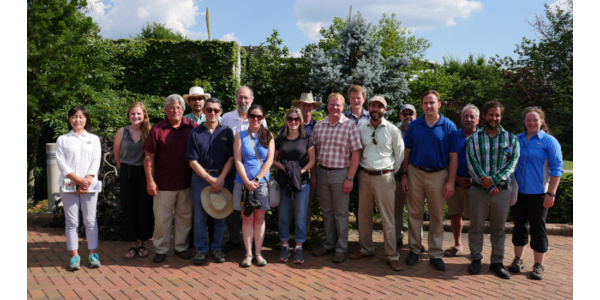 Associate professor of horticulture and nursery Extension specialist Sarah White was one of four researchers who accepted the Multistate Research Award for their outstanding collaboration on behalf of a team of scientists from 21 land-grant universities during the annual meeting of the Association of Public and Land-Grant Universities on Sunday in Washington, D.C.

Research assistant professor John Majsztrik of Clemson’s College of Agriculture, Forestry and Life Sciences is part of the project team as well. Majsztrik and White have each served four-year rotating leadership terms of secretary, vice chair, chair and past chair for the project at various points since its inception.

James Altland (USDA-ARS), Tom Fernandez (Michigan State University) and John Lea-Cox (University of Maryland) joined White in accepting the award from Jay Akridge, chair of the Agricultural Assembly Policy board of directors, and Sonny Ramaswamy, director of the USDA National Institute of Food and Agriculture.

White works in the area of runoff water management and quality, helping growers manage runoff water on their sites.

“After irrigation water is applied, some is taken up by plants and, depending on the grower, 20 to 80 percent could run off,” White said. “So what are they going to do with that? Are they going to treat it? Are they going to release it? We looked at giving them the technologies that they need to actually clean that water so they can release it or reuse it without harm to the plants they grow or the environment.”

The group began work on proposals in 2010, and White pointed to its formation as instrumental in helping Clemson researchers to land an $8.7 million Department of Agriculture award in 2014 aimed at designing and demonstrating ways to treat and recycle water.

“The research group is seven years old and we have already accomplished a lot of collaborative relationships that have resulted in over $20 million in research for the group, which is impressive,” White said. “The other thing that it does is it has enabled connections across the country, so that technologies that we work with in the South can be applied out West and vice-versa.

“So it’s just opened our eyes to who we can work with to complement what we do to have greater impact than we did just working by ourselves.”

Majsztrik echoed her sentiment, noting that the group’s benefit is bringing together scientists from across the county with a common goal.

“It allows us to not just talk about issues on the East Coast or the things that are particular to our state, but to look at water from a broader perspective and look at trends nationwide and put together projects that have a depth of researchers across the breadth of the country and to be able to put together teams that tackle issues that growers are dealing with,” said Majsztrik, whose area of expertise within the project deals with fertilization and irrigation management.

“The amazing thing with our group is that we haven’t been around very long,” Majsztrik added. “There are some of these groups that have been around for 15 or 20 years, some of them 30, and they’ve had a really long time to create an impact. Whereas our group has only been around for seven years, so to have this much impact in this small period of time is really, to me, a big accomplishment. It shows how well we work together.”

Project members are leading or have led 41 grants totaling more than $21.6 million from the USDA, state Departments of Agriculture, nursery and landscape associations, garden centers, public and private foundations and industry sources.

“Effective water management is essential to the future of our state, nation and world,” said Tanju Karanfil, vice president for research. “Properly managing this valuable resource will require the type of broad cooperation facilitated by this multistate team of scientists. I congratulate Drs. White and Majsztrik on this award and thank them for their leadership on this matter.”

Tips for safe and delicious holidays