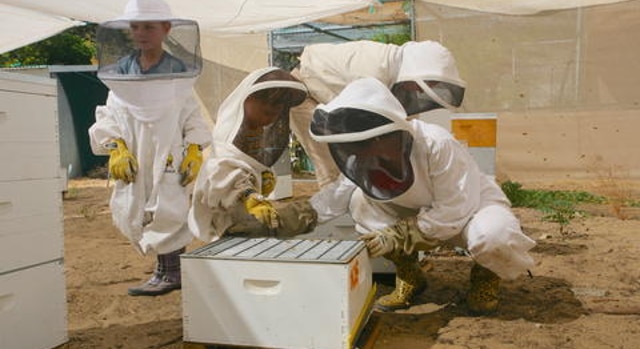 RIVERSIDE, Calif. — The University of California, Riverside, is leading a new effort to stop and reverse a worldwide decline in honeybees, which threatens food security and prices.

Honeybees pollinate more than 80 agricultural crops, which account for about a third of what we eat. Several factors, including pesticide exposure and the spread of parasites and environmental changes, are to blame for the widespread collapse of bee colonies over the past decade.

To boost dwindling honeybee populations, the University of California’s Office of the President has awarded $900,000 to a four-campus network of bee researchers and engineers.

“This will become one of the largest honeybee health networks in the country,” said Boris Baer, a professor of entomology at UC Riverside and principal investigator of the project. “I’m very excited about so many different kinds of bee expertise joining forces through this project.”

The network, which includes researchers from the Davis, San Diego and Merced campuses, is approaching the problem in three main ways.

The first is through breeding programs — a particular focus of Baer’s laboratory. “We seek to identify and breed bees that are better able to cope with environmental stress,” he said.

A second goal of the new network is to develop medications and treatments for sick bees. Certain types of honeybees generate molecules that make them more tolerant of pesticides and parasites. New technology will enable the scientists to isolate those molecules and use them as a basis for drugs.

“We know bee queens have a special pheromone they give off when they’re hungry or dying, and these can be traced,” Baer said. “We are essentially building ‘electronic veterinarians.’”

Preventative devices like these are key to keeping bees alive, because once the colony collapses, it’s too late to bring it back, Baer said.

Nominations sought for American Lamb Board