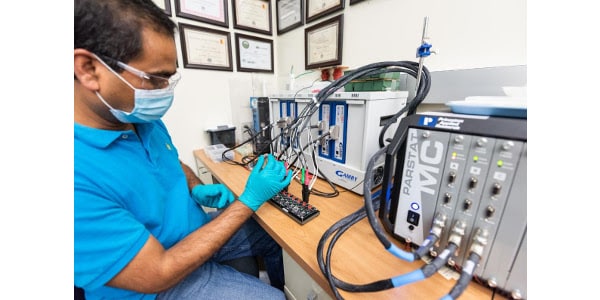 Scientists at the Kansas Polymer Research Center have invented a new kind of battery that is more eco-friendly. (Courtesy of PSU)

PITTSBURG, Kan. — Scientists at the Kansas Polymer Research Center have invented a new kind of battery that is more eco-friendly.

While that’s good news, equally good news is that they invented it by transforming a product that is plentiful in the heartland: soy. Or rather, crop residue after soybeans have been harvested.

“We’re using the stems, the leaves, the shells — things that would otherwise have no commercial value — to produce activated carbon material and suddenly that has tremendous value,” said Associate Professor of Chemistry Ram Gupta, the chief researcher for the project.

Soybeans are the number one crop in Missouri, and one of the top 10 crops in Kansas. A grant from the Missouri Soybean Merchandising Council using soy checkoff dollars funded Gupta’s research in the labs at the KPRC, located on the campus of Pittsburg State University.

“Research has long-been a priority for the soy checkoff, and our commitment to innovation is a key driver in partnerships like the one behind this technology,” said Kyle Durham, a farmer from Norborne, Missouri, and chairman of the Missouri Soybean Merchandising Council. “Soy is an incredibly versatile crop and developing new uses for all parts of the soybean is an exciting opportunity, powering the bright future we know is ahead.”

Demand for batteries is growing rapidly — to the tune of about 10 to 12 percent annually in what has become a $100 billion industry globally.

“Think about how many batteries we use — laptops, phones, computers, automobiles — in daily life. They’re everywhere,” Gupta said.

His invention is aimed at replacing the more costly conventional activated carbon-based batteries made from fossil fuels. A patent is pending and once it’s finalized, the new technology will be available for licensing to commercial buyers.

“This is important to farmers, to jobs, to green energy,” Gupta said. “It adds value to soybeans and creates a new market.”

An added bonus: the research was done with the assistance of students majoring in polymer chemistry, giving them a unique opportunity on their path toward a degree and ultimately, a career in what has become a lucrative field.

“We have this great polymer program and we want more students in it, because there are good paying jobs, jobs that make a difference, and we have a fantastic facility for them to learn in alongside scientists like Dr. Gupta,” said Bobby Winters, associate dean of the College of Arts & Sciences at PSU, which includes the Department of Chemistry.

Their work isn’t finished yet, though, Gupta said.

“Our ultimate goal is to produce a dual carbon battery, with both electrodes made of biomass instead of just one, and to achieve a more efficient battery that can be used in the automobile industry that charges in just 10 to 15 minutes instead of a few hours,” he said. “That’s the next step.”

The Missouri Soybean Merchandising Council is a statewide, farmer-led organization working to improve opportunities for Missouri soybean farmers though a combination of research, outreach, education and market development efforts supported by the soy checkoff. To learn more, visit mosoy.org.