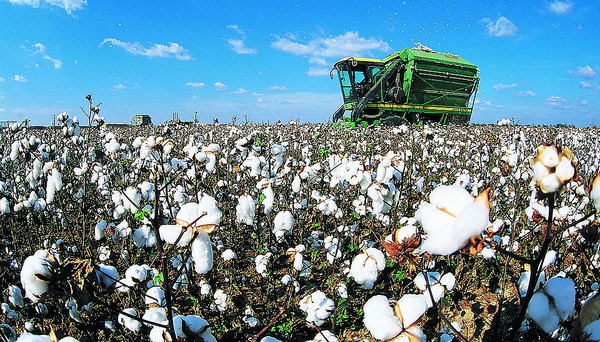 Texas A&M scientists successfully introduced a genetic trait that allows cotton to thrive in soil that has been enriched with phosphite, which has one less oxygen atom than the phosphate used in traditional fertilizers. Because the weeds don't have the same trait, they are essentially starved of nutrients. (Visit Mississippi, Flickr/Creative Commons)

The San Antonio Express-News reports if it works as well in the San Angelo test field as it has in a campus greenhouse, the technology could prove revolutionary to a crop that in some regions has become vulnerable to weeds that have developed resistance to three generations of pesticides.

Through a painstaking process, the A&M scientists successfully introduced a genetic trait that allows cotton to thrive in soil that has been enriched with phosphite, which has one less oxygen atom than the phosphate used in traditional fertilizers. Because the weeds don’t have the same trait, they are essentially starved of nutrients.

For decades, the magic formula was to spray fields full of cotton genetically engineered to resist herbicides, such as Roundup, and then watch the weeds dutifully die. But nature started mutating the weeds so they, too, resisted the chemicals.

The result has farmers spending some $9 billion a year in a desperate search for the right mix of older and newer weed killers. In the Mississippi Delta, 60 to 70 percent of the weed populations have developed three-way resistance. Farmers are struggling to keep up.

Hake referred to the new technology as the “Superman” of weed control, a mighty successor to Monsanto’s glyphosate-based Roundup and others.

“We have not had a new herbicide mode of action since the early ’80s,” Hake said. “We got a new mode of action approximately every year for about 30 years and since then it’s just been flatlined.”

In Texas, the nation’s leading cotton-producing state, the commodity contributes an estimated $24 billion a year to the economy. In addition, Hake said, cotton is seeing a resurgence in demand as both a natural fiber and one that’s better for the environment than petroleum-based polyester.

The ptxD gene that allows absorption of phosphite was first isolated by William Metcalf of the University of Illinois. A Mexican research team then patented the concept of introducing the gene into plants to make them more competitive against weeds in the field.

An A&M team led by Keerti Rathore has been taking the technology to cotton plants. Unlike easily modified “plant mice” such as tobacco or arabdioxis, cotton is a slow-growing, complex plant and notoriously hard to genetically transform.

During a recent tour of the temperature-controlled lab, Rathore showed petri dishes full of cells that take an average about 10 months to produce a plantlet. From the plantlet, it can take another year to grow a plant with a root system strong enough to survive in the greenhouse and produce seeds.

“It’s kind of like a treasure hunt,” she said. “You’re always looking for the right colors and the right textures.”

Validation came in the greenhouse.

Weed scientist Muthu Bagavathiannian had no trouble finding herbicide-resistant pigweed, which can produce up to a million seeds per plant compared to cotton’s 200 to 300.

Cotton lacking the gene pioneered at A&M got crowded out by the weeds in fields where the soil was fertilized with phosphate.

But transgenic cotton grown on phosphite-fertilized soil grew nicely while the weeds did not.

“It is a very simple yet elegant technology that has the potential to revolutionize agriculture as we know it,” Rathore said.

The greenhouse plants are now producing the seeds for the next step, which will be on a carefully controlled field in San Angelo.

The field was chosen because it is naturally low in phosphorous, as a high-phosphorous field would feed the weeds and defeat the purpose.

That won’t be a problem in most parts of the world because phosphorous is in dangerously short supply. Current stores of the vital element are closely guarded in a few places, including Morocco, China and Florida. European scientists have been looking for ways to reclaim phosphorous from animal and human waste.

For most U.S. farmers, the problem has been overuse.

“Our farmers put too much fertilizer on their fields, nitrogen and phosphorous in general,” Rathore said. “I think for us to kind of really utilize this technology we’ll have to kind of wean the farmers off, using less and less.”

His hopes for the technology are threefold: farmers will be able to spend less on inputs including fertilizers, herbicides and water otherwise getting “stolen” by the weeds; phosphorous in the form of phosphate will be depleted at a slower rate; less of the nutrient will wash off into waterways, where it contributes to algae blooms plaguing the world’s oceans and great lakes. He’s also confident the technology will work in other crops.

Phosphite fertilizers will need to become more readily available, but Rathore said there are companies ready to step up to sell it. Phosphite is already used in potato production, as it inhibits the fungi that caused late blight and, in the 19th century, Ireland’s Great Famine.

This is not Rathore’s first foray into the genetically modified cotton world. About a decade ago, his team made headlines for removing a toxin from cottonseed and making the seed a valid, high-protein animal feed. Countries including India and Mexico, which are typically resistant to genetically modified crops, have been receptive to the technology.

“That will be maybe the fifth product developed by a public institution that has gone to that level,” Rathore said. “Most of these GMO products are developed by companies like Monsanto, Bayer, Syngenta and so on.”

The long-term challenge will be making sure growers use a mixed-bag approach to reduce the likelihood that weeds will eventually mutate their way toward being able to feast on phosphite.

“If you just imagine like a lock and key, you’ve got to have the right combination to be able to open it,” said Bagavathiannian, the weed scientist. ” … Nature changed the locks.”

The new technology involves not so much an attack approach as a genetic change to the plant’s metabolism, and the researchers said it would be unlikely weeds would generate a similar change on its own.

“In order for them to be able to do that, one of the genes will have to have several stretches of mutations in that gene,” Rathore said. “That is unlikely to happen.”

But it’s not outside the realm of possibility, and farmers will have to be careful to use it as part of a multifaceted resistance management program.

“You know everybody thought the answer to the world’s problems was Roundup-ready cotton, you could spray it with Roundup, a very safe herbicide, and actually destroy everything but the cotton,” he said. “But the weeds found their way.”

In drought years like this that make for a poor grain crop, farmers are more dependent on their cotton, he said. At this point, they’re very receptive to the promises of the new technology.

“The producers are willing to look into anything that will help them save on production,” he said. “They’d love to put out less herbicides, less fertilizer and produce their crop at a lower cost.”

Quarantine for Newcastle disease in 2 counties