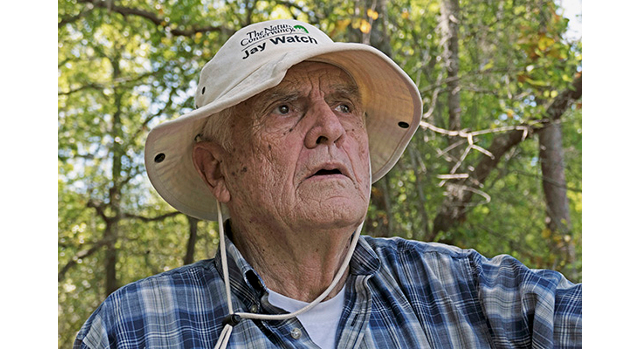 Fred Hunter is known by all as “Mr. Scrub-jay” for his dedication to the bird. (Renee Bodine)

GAINESVILLE, Fla. — The Florida scrub-jay is in peril. Less than 10 percent remain as development pushes them out of the only place they can survive: dense scrub oak and saw palmettos packed into the dry sandy hills of the Florida scrub.

Fred Hunter wants to give them a home. Known as “Mr. Scrub Jay” to friends and family, he has dedicated himself to protect this charismatic bird and the habitat it depends upon.

Fred Hunter is woodsman. Born in 1931 and raised in Orlando, he played, fished and hunted when it was a small town in a wild paradise. As it grew into a city, Fred wanted a place that was still wild. He bought 600-acres abutting Seminole State Forest on the west, east and south of his property and Ocala National Forest on the north. In 2003, the retired Navy commander built a log house on it for his kids and grandkids to visit, and to be with his jays.  Ann, his wife for 55 years has been beside him all along, helping make the land acquisitions possible and providing hospitality for all the visitors associated with protecting the Florida Scrub-Jay on this important wildlife corridor.

Enter Fred and Ann’s log house and a plush scrub-jay stuffed toy, framed photos, a mug, hat, a poem and awards dedicated to the Florida scrub-jay adorn walls and tables.  Fred promptly whips out his maps to show visitors his property and plans to restore it.  A tour of his scrub and the scrub-jays living there will be offered in his ancient Isuzu Trooper II and you will be captive to Fred’s exhortations of the exceptional qualities of the state’s finest bird.

About 300-plus acres of his property is scrub, and about half is suitable for Florida scrub-jays. These remarkable birds are curious and friendly. They mate for life, forming small families that live in 20-acre territories. A juvenile helper stays with the parents and helps raise and protect new fledglings until it goes off to establish its own family.

After Fred restores his scrub, he could have up to as many as 14 territories for scrub-jays, each accommodating a family group. Right now he has four families. “They are so smart. I like their military bearing—they are alert and at attention. They are so friendly and family oriented,” he says.

Fred frequently ventures out to visit his scrub-jays, check his restoration efforts and show visitors this amazing bird. Bumping over narrow, sandy dirt roads twisting through dense scrub and palmettos, Fred stops his old Isuzu Trooper at a patch of bare white sand.

“They recognize the vehicle, or if not, I can call them,” he says.  The sun is high and hot, and not the ideal time of day for them to make a showing.

“They are very friendly, and remember you,” he says.

Fred shoves a cassette tape into the player on his dash and climbs out while tinny scrub-jay calls peal from the car speakers.

It doesn’t take long before a scrub-jay swoops out of a tangle of scrub oak branches and hops onto the sand right in front of Fred. About 11-inches long with cerulean blue and pewter plumage, the jay cocks his head and confronts Mr. Hunter with piercing black eyes. Fred knows most of the jays on his property, and offers stories about those that greet him.  “They are the most interesting bird, but they are only in Florida and have declined 90 percent,” he says.

The Florida scrub-jay is going extinct in some parts of the state.

In the 1920s, roughly 100,000 scrub-jays were counted in Florida. A 1992 Archbold Biological Station census counted 10,000 and in 2011 another count saw a population reduction to 6,000 according to Ralph Risch, a biologist specializing in the species for the Florida Forest Service.

“Fred has a pervasive and infectious passion for the Florida Scrub-Jay. I cannot remember not being with Fred when he didn’t start talking about his love for this bird and his views on how he can help to preserve and protect it,” he says. Ralph first met Fred in 2006 when he was setting up survey points for the first Jay Watch on Fred’s property.  Jay Watch is a volunteer organization that surveys populations each year.

Initially the citrus industry displaced scrub; now development encroaches. Decades of fire suppression has left the remaining scrub too overgrown for the jays to forage and reproduce successfully. “At this point every little bit of scrub we can get is critical, and Fred’s property is so important because it creates a habitat corridor,” Ralph says. For the long-term survival of a Florida scrub-jay population, the species requires 750 acres of contiguous scrub. The juvenile females must disperse to form new families, and they need somewhere to go. Scrub-jays do better with multiple territories next to each other. Even though they fight, he says, they also cooperate, like a neighborhood.

Each morning the jays go out and taunt each other, flying along the borders of each other’s territory and verbally sparring. One bird at a time from each family group stands “sentinel,” looking for predators and gives an alarm call to alert the rest of the group. Two different alarm calls distinguish between aerial predators and ground predators. When the sentinel gets hungry and flies down to feed, another well-fed bird immediately takes its place. But if a Cooper’s hawk or snake approaches, they all gang up on it. Everyone cooperates to drive an intruder out of their territory, Ralph says.

“It is easy to anthropomorphize the scrub-jay. They behave very much like humans,” he says.

Ralph has observed three families go together as a group to a horse trough on the Seminole State Forest to bathe, standing guard while each takes a bath. When they have all had a turn, they go home.

Scrub-jays have astonishing memories. Each will store 6,000 to 9,000 acorns individually in the sand and mark every location with a pebble, leaf or twig to find later in the winter. And they do, recovering more than half. Its curiosity and fearlessness makes it easily hand tamed. “It isn’t unusual for one to spontaneously decide to land on your head,” Ralph says.

The male and female scrub-jays look alike to the human eye, but their plumage reflects colors in the ultraviolet spectrum, which birds see. In the UV spectrum males and females look very different. The best way to spot a female is her call: a fast hiccing sound, which varies with each population.  Not very good flyers, they hop between scrub bushes and walk.  “It’s an endearing bird because it has such a personality. People love it and want to protect it,” Ralph says.

What is prime scrub-jay real estate? Three scrubby oak species make up 67 percent of the plant community: 34 percent sand live oak, 26 percent myrtle oak and 7 percent Chapmans oak.  Florida scrub-jays build their nests in these oaks, preferring Chapman’s or sand live oak with various vine species growing over and through the branches to provide a screen for nests.  Saw palmetto, rusty lyonia, silk bay and sand pine comprise the rest of the vegetation.

Density is important. Jays flourish in small oak clumps standing about waist high interspersed between diverse vegetation with open sand comprising one-third of the space. These open areas allow the jays to see their predators while the clumps make it difficult for snakes to find the nests. Black racers, yellow rat snakes, red rat snakes and eastern coachwhip snakes seek out the jays and their nests, along with crows, hawks and the occasional raccoon and possum.

Scrub is fire dependent. It must be chopped or burned or both for the jays to use, preferably every eight to 16 years, depending on how fast it grows. “You have to treat it. If you just let it sit, or prevent it from burning naturally, its scrub-jays will go extinct,” Ralph says.

Chopping and burning is what Fred is doing. District Conservationist Suzy Daubert is helping Fred restore the scrub with financial and technical assistance through the Working Lands for Wildlife and Conservation Stewardship programs through USDA’s Natural Resource Conservation Service. “Suzy—I can’t say enough about her, for the plans she puts together and work she does,” Fred says.

JAY WATCH
Every July Jay Watch volunteers and field biologists survey populations with Fred on his property. Beginning an hour after dawn when the jays are most active,Logan McDonald, regional volunteer coordinator for Florida Fish and Wildlife Conservation Commission, stops at a site marked with a pink ribbon tied to a scrub oak and holds a speaker aloft playing scrub jay calls for a full minute. She and volunteers wait two. If they don’t spot any jays, she repeats the process two more times. When jays respond, volunteers record the number of adults and juveniles, the colors of bands if they have them and their behavior. Over three days McDonald and volunteers monitored 13 survey points marking known scrub-jay family territories.

This is the 12th year Jay Watch has done a count on Fred’s property. There were hardly any scrub-jays when Fred moved there. Last year theyidentified three family groups, adults with juveniles.  This year Jay Watch observed four families on Fred’s land.

Land managers use the survey results to determine trends in populations and identify where to improve their habitat. The Nature Conservancy began Jay Watch in 2002, with Audubon Florida taking the lead in 2010.

Reed Bowman, Ph.D. research director of avian ecology at Archbold Biological Station has dedicated his career to the Florida scrub-jay. Next year is the 50thanniversary of researching and monitoring the scrub jay population on Archbold, where 120 families are located. Reed has been part of that study since 1990. “They had me when the first jay landed on my shoulder,” he says.

Reed has been friends with Fred for a decade, going out to look at the jays, sharing what Fred is doing to improve the habitat and looking at scrub that needs to be treated. No one remembers exactly when Fred earned his name of Mr. Scrub Jay, but Reed says it fits. ”Fred’s greatest trait is his persistence and willingness to protect his property, and he wants to share his passion with others,” he says. “Fred’s success is important because it will be everyone’s success. If he succeeds, more and more private landowners will want to follow his lead.”

Fred has been formerly recognized for his dedication to the Florida scrub-jay: 2010 U.S. Fish and Wildlife Private Landowner Stewardship Award for his conservation efforts, 2010 Florida Forest Stewardship Program Certification for outstanding natural resource management and 2011 Defender of the Environment award from Nature Wise Inc.  But most prized is a poem, Rare Bird, written for Fred by friend Mark Terry in 2011 celebrating the jay and Fred’s protection of its habitat.

White sand lies beneath sand pine where tendrils out the berry vine through thickets of palmetto fronds and live oak – far from cypress ponds. Along the ridge of ancient shores lives the bird our friend adores.

He bought the land, returned it to the habitat the scrub jay knew and claimed that place a haven for

Endemic bird to thrive and soar.

What drives a man to stand a cause; to fight against progressive saws and walk the talk with intensity?

That is a heart of immensity.

Though eighty years has grown the man, that’s eons less than feathered clan has flown across the sunshine state, yet still questioned is its fate.

But, Fred Hunter deemed that in one place this jay can live in guarded space.

So I ask, who is more the rarer then…the bird…or, the one who is its friend?

–Photos and story by Renee Bodine

Up to 48 extinctions prevented by conservation
September 16, 2020