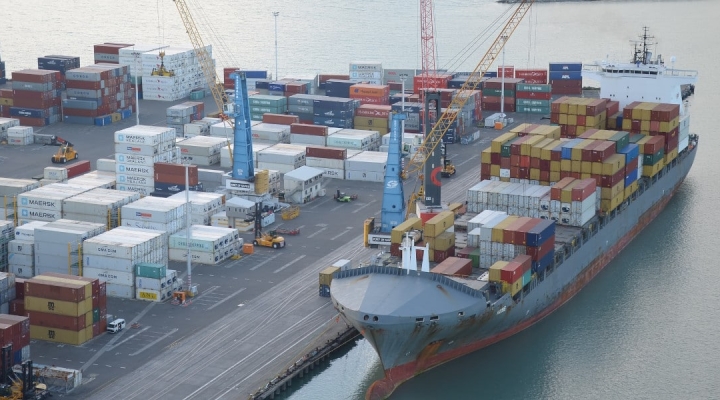 The Razoni, loaded with 26,000 tons of corn, left Odesa on Aug. 1. The cargo ship was the first to leave a Ukrainian-controlled port in the country since Russia launched the war in February. (Stock photo by Michael on Unsplash)

DUBAI, United Arab Emirates (AP) — The first shipment of grain to leave Ukraine under a wartime deal appears to have ended up in Syria — even as Damascus remains a close ally of Moscow, satellite images analyzed Tuesday by The Associated Press show.

The arrival of the cargo ship Razoni in Syria comes after the government in Kyiv praised the ship’s initial departure from the port of Odesa as a sign that Ukraine could safely ship out its barley, corn, sunflower oil and wheat to a hungry world where global food prices have spiked in part due to the war.

But its arrival in Syria’s port of Tartus shows how complicated and murky international trade and shipping can be. Syria has already received Ukrainian grain taken from Russian-occupied territory amid Moscow’s war on Kyiv.

Images from Planet Labs PBC analyzed by the AP showed the Sierra Leone-flagged Razoni at port just before 11 a.m. Monday. The vessel was just next to the port’s grain silos, key to supplying wheat to the nation.

Data from the Razoni’s Automatic Identification System tracker shows it had been turned off since Friday, when it was just off the coast of Cyprus, according to ship-tracking website MarineTraffic.com. Ships are supposed to keep their AIS trackers on, but vessels wanting to hide their movements often turn theirs off. Those heading to Syrian ports routinely do so.

The Razoni could be identified in the satellite image by its color, length and width, as well as the four large white cranes on its deck. Samir Madani, co-founder of the oil-shipment website TankerTrackers.com and an expert on following ships via satellite images, similarly identified the vessel from the image.

The Financial Times first reported on the satellite image.

The Razoni, loaded with 26,000 tons of corn, left Odesa on Aug. 1. The cargo ship was the first to leave a Ukrainian-controlled port in the country since Russia launched the war in February. As part of the deal, a United Nations coordination center in Istanbul staffed by Turkey, Russia and Ukraine oversees the shipments to make sure they safely travel through the Black Sea, which has mines in some areas and has seen combat during the conflict.

But Lebanon, which was Razoni’s presumed destination, ended up not taking the shipment, even as it struggles with its own economic crisis. Lebanese media had reported that after a monthslong delay due to the war in Ukraine, the merchant who had bought the shipment no longer wanted it.

The vessel sat off Mersin, Turkey, before heading to Syria.

Asked about the Razoni, the U.N. Joint Coordination Center said in a statement that “after outbound vessels clear inspection in Istanbul, the JCC ceases monitoring them.”

“The cleared vessels proceed then to their final destinations, whatever those may be,” the center said.

On Tuesday, the Ukrainian Embassy in Beirut referred to an earlier statement that Razoni’s cargo was no longer Kyiv’s responsibility.

“Our task has been to reopen seaports for grain cargo and it has been done,” the statement said.

“What matters most to us are a couple things,” Price said. “One: That Ukraine is appropriately compensated for the grain, the foodstuff, for the crops that it is in this case providing. And that the food gets to where it is needed most.”

An official reached by telephone Tuesday at the Tartus port declined to comment. Syria’s mission to the United Nations did not respond to a request for comment.

Syria remains sanctioned by the West over killing and abuses of civilians during the civil war, though food supplies have been exempted by the West. Russian military support has been key to Syrian President Bashar Assad remaining in power. Syria has recognized the Russian-backed breakaway eastern Ukrainian regions of Donetsk and Luhansk as sovereign entities, leading to Kyiv severing diplomatic ties with Damascus.

Since earlier this year, ships have carried Ukrainian foodstuffs from Russian-occupied territory to Syria. In May, satellite images showed the Russian-flagged Matros Pozynich at dockside in Latakia, Syria. Ukraine said the ship had 27,000 tons of grain Russia stole from it and initially tried to sell to Egypt, which refused to take the cargo.

Associated Press writers Kareem Chehayeb in Beirut and Matthew Lee in Washington contributed to this report.

EDITORIAL: The enemy within our industry…