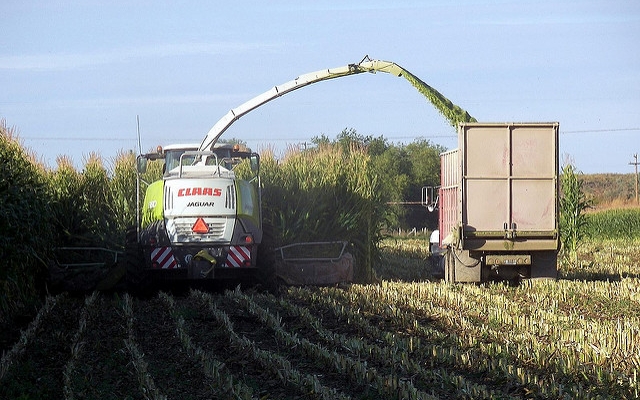 “As drought conditions deepen in South Dakota and the surrounding region, the likelihood of corn making a harvestable grain crop in some areas is so low that the best option is to take an early forage harvest,” he said. “However, we need to make certain that we aren’t just trading one problem for another by salvaging drought damaged corn.”

Rusche explains that nitrate accumulation can be a very real issue during drought conditions which can lead to potential issues with abortions and/or death loss.

Testing prior to harvest is the safest approach.

Increasing the cutting height also helps as the greatest nitrate concentration tends to be in the lowest portion of the stalk.

Cutting for silage
Cutting drought-damaged corn for silage is hands down the best harvest option.

“There is little need to worry about moisture content of the crop plus there is the added advantage of potential reductions in nitrate concentrations during the ensiling process,” Rusche says.

The feeding value, even of short, barren stalks is relatively high, as silage – as much as 70 to 80 percent of normal corn silage.

In extreme cases, Rusche says it may be necessary to first windrow the corn and use a pickup head for chopping if the crop isn’t tall enough for conventional equipment.

“In fact, a good fermentation is critical to reduce nitrate concentrations,” Rusche said.
Harvesting at the right moisture content, using proven inoculants, achieving the correct density and excluding oxygen from the pile or bunker are important steps for maximizing silage value, regardless of the quality of the crop.

An SDSU trial conducted during the 2012 drought illustrates some of the reasons this is discouraged.

“Getting corn dry enough to bale poses a key obstacle. Even damaged corn can be much wetter than they look and thick stems take a long time to dry down,” Rusche explains.

In the 2012 trial, the moisture content of the corn plants at the time of cutting was 68.2 percent. After field curing for 30 days, the crop dried down to 16.2 percent.

Extended curing times can result in increased losses of leaves and husks; which in fact happened in the 2012 trial. If the stalks do not completely dry down, the likelihood of spoilage is high.

Other options
Another option SDSU evaluated in 2012 was baling the corn at a higher moisture content with bale wrap (baleage).

“Using that technique was successful, to a point,” Rusche says. “The resulting feed had 6.4 percent crude protein compared to 8.6 percent at the time of cutting, plus the resulting bales were extremely heavy and difficult to move.

Those factors plus the expense of the wrap and the hassle of disposing of the plastic lead one to conclude that harvesting corn as baleage is less than ideal.