Home » Saluting those who serve 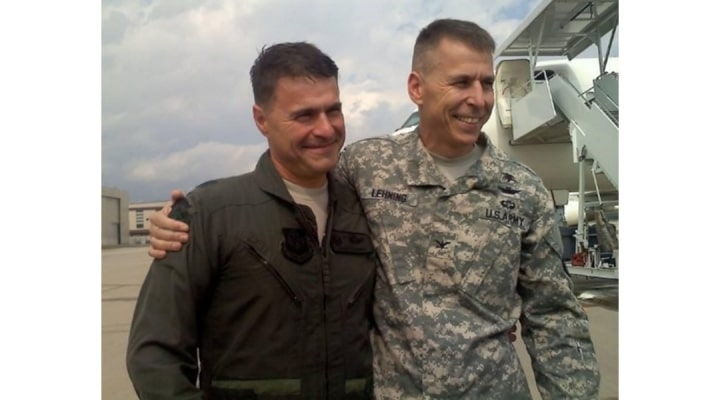 ROME, N.Y. — Whether it is serving in the military or at a fire station, volunteering on a school board, running for local office, or supporting community organizations, cattle farmers and ranchers are dedicated to helping others. According to the 2017 Cattlemen’s Stewardship Review, about 20 percent of U.S. cattlemen and cattlewomen have served in the military, more than the national average of 14 percent. And 39 percent donate their time to other civic organizations, compared to a national average of 7 percent. Here is one story of New York beef producers making a difference.

Brothers John and Peter Lehning grew up on a small farm in western New York active in 4-H raising cows, sheep, and chickens. Their love of agriculture came from their father who was born and raised on a dairy farm but who enlisted in the United States Army after graduating from high school. His service inspired both brothers to follow in their father’s footsteps and pursue careers in the military.

“Although my dad never talks much about his combat experience during the Korean War, his service is what guided my interest in joining the United States Air Force,” said John.

Both brothers went to college through the ROTC program. John studied criminal justice at Michigan State University and Peter went to Cornell to major in environmental science. They completed their education knowing military service was meant for them.

John spent more than 24 years flying aerial refueling tankers around the globe and as a Special Operations 757 pilot while Peter flew medical evacuation helicopters in Iraq and led health care operations in Afghanistan. Military service is a family affair as both of their wives are veterans as well. Peter’s wife, Lisa, served in the Army and now works full-time for the Veterans Administration, and John’s wife, Sandi, volunteered in the Peace Corps in Africa before serving as a Public Health Officer in the Air Force.

John and Peter loved their military service and the experiences it provided for more than two decades, but after retiring, it was time for them to return to their agricultural roots in upstate New York. They started Lehning Farms with a couple of Red Angus breeding pairs and have grown to an average-sized herd of 25 head. Their wives and children all have a hand in the operation and the farm partnership works well for the entire family, especially with John’s unique schedule as a full-time pilot for American Airlines.

“You are never bored when you have property and manage a farm,” said Peter. “I love the rural lifestyle and appreciate what this area has to offer me and my family.”

“Our customers like the pasture to plate concept and want to support local producers,” said Peter. “The box option is a unique way to meet the needs of this niche market by providing product in a way that still fits in their freezers.”

Beyond the day-to-day farming duties, John and Peter find time to volunteer with a variety of local organizations. In addition, Peter currently serves as Chairman of the New York Beef Council, and he and John are actively involved with the New York Beef Producers Association.

Agriculture runs deep in the family. In addition to the cattle operation, Sandi has a successful business providing cut flowers for weddings and parties, the Lehning’s sister, Sarah, in Virginia is the lead grower in a greenhouse operation and numerous aunts and uncles are involved with vegetable and dairy farming.

Their lives may be busy with farming and family, but there is still time for some brotherly banter. While both brothers flew aircraft in the military, there is a little friendly debate as to whether planes or helicopters remain supreme. John prefers the speed and agility of a supersonic trainer like the T-38 Talon, and Peter enjoys the reliable “Huey” helicopter, which is unforgiving, but a great machine to learn how to fly. No matter what the sibling rivalry may be when it comes to aviation, both agree that returning home and raising cattle is the best way to live.

This article along with others can be found at https://www.nybeef.org/about-us/newsroom/news

Funding aims to attract people and jobs to rural areas