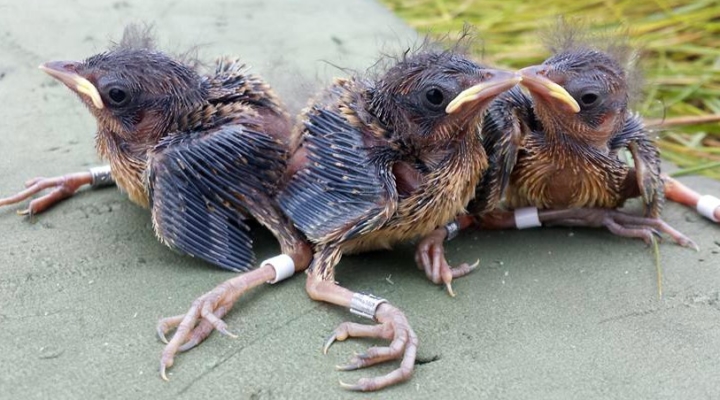 Saltmarsh Sparrow nestlings. Experiment station researchers found that, unlike other birds, Saltmarsh Sparrows do not manipulate the sex of their offspring based on environmental or maternal conditions as would be expected based on evolutionary theory. (Credit: Bri Benvenuti/UNH)

DURHAM, N.H. – In birds, females have the ability to control the sex of individual eggs; therefore, a mother may be able to choose whether she prefers each egg laid to be a male or female. This means that offspring sex ratios are not usually left to chance. From an evolutionary standpoint, this can be very beneficial, as different circumstances may favor the success of sons versus daughters.

But when it comes to Saltmarsh Sparrows, researchers with the New Hampshire Agricultural Experiment Station have found that unlike some other birds, Saltmarsh Sparrows do not appear to manipulate the sex of their offspring based on environmental or maternal conditions as might be expected based on evolutionary theory.

“Evolutionary theory suggests that if the potential benefits of raising one sex over the other vary in relation to environmental or maternal conditions, then females should favor the production of that sex. Typically, high-quality sons are more beneficial to mothers, because they have the potential to produce far more grandchildren than daughters can as males can mate many times, but females are limited by how many eggs they can produce, incubate, and raise to fledging. More offspring equals greater lifelong success,” said experiment station scientist Dr. Adrienne Kovach, assistant professor of natural resources and the environment.

“Still, there is a risk to biasing offspring production toward sons; if the son is of low quality such as being competitively inferior, he may not reproduce at all. On the other hand, daughters tend to need less resources to reach maturity, and if they survive, they almost always reproduce. With this in mind, one could logically say that producing daughters represents the ‘safe bet’— you might get a smaller payout in terms of numbers of offspring, but you know you’ll get something,” said Bri Benvenuti, a 2016 graduate who conducted this research as part of her masters degree under Kovach’s supervision.

Saltmarsh Sparrows live a stressful life. Benvenuti and Kovach explained that sparrows build nests in the marsh grasses just inches above the marsh surface that is regularly subjected to tidal flooding. Nests are more likely to escape these flooding events and successfully fledge offspring if they are timed to fledge within the 28-day lunar tidal cycle.

Saltmarsh Sparrows are also one of the world’s most promiscuous birds, with almost every egg in a nest having a different father thanks to the scramble of competition among males for access to females. These characteristics provide interesting hypotheses in the context of evolutionary theory. Would Saltmarsh Sparrow mothers produce more sons, who would be larger, more likely to survive a nest flooding event, and have the ability to produce more offspring through multiple matings? Or would they take the “safe bet” and produce more females?

Using DNA analysis, they determined the sex of Saltmarsh Sparrow chicks and calculated the offspring sex ratio for the four study sites and across the whole study population. They then used a modeling approach to determine if there was an influence of environmental conditions (year, tidal flooding, precipitation), temporal effects (nest initiation in relation to flood tides, timing within the breeding season), or maternal condition on offspring sex ratios.

Surprisingly, they found an even offspring sex ratio of 1.03:1 of males to females when averaged across all years and sites. Offspring sex ratios did not vary as a function of the environment, tidal flooding risk, or female condition. They did find a pattern of annual variation between male and female bias that mirrored the adult sex ratio in the preceding year.

“While numerous studies have provided evidence that female birds may have the ability to adjust offspring sex ratios in an adaptive way, we found no evidence for adaptive sex ratio manipulation in Saltmarsh Sparrows in relation to our hypotheses. Instead, the observed time-lagged relationship between offspring and adult sex ratio meets expectations of frequency-dependent selection, whereby females respond to higher frequencies of one sex by increasing production of the rarer sex, which would have a temporary fitness advantage. Our findings overall show support for balanced offspring sex ratios at a population level over time,” Kovach said.

The study adds to a growing body of literature characterizing the nature of sex allocation in birds. In addition, balanced population-wide sex ratios may have important conservation implications.

“Saltmarsh Sparrows are threatened by sea level rise, which results in higher tidal water levels and higher rates of nest flooding. As sea-levels rise, these environmental changes on the marshes are expected to continue. If Saltmarsh Sparrows manipulated their offspring sex ratios in response to environmental conditions, then the consistent environmental changes predicted by rising sea levels could result in skewed population-wide sex ratios, which can be detrimental for declining species and small populations. Knowing that Saltmarsh Sparrow sex ratios will not be biased in response to these future changes is one bit of good news for this species that is already in trouble,” Kovach said.

This research is presented in the current issue of The Auk: Ornithological Advances in the article “Annual variation in the offspring sex ratio of Saltmarsh Sparrows supports Fisher’s hypothesis” (DOI: 10.1642/AUK-17-148.1). In addition, graduate student Logan Maxwell and postdoctoral researcher Gemma Clucas, who formerly as an experiment station-funded postdoc, both presented on this research at the Americal Ornithological Society Meeting earlier this month in Tucson Arizona. Maxwell also presented this researcher at the New England Estuarine Research Society meeting April 28, and will present this research today at the the UNH School of Marine Sciences graduate symposium.

This material is based upon work supported by the NH Agricultural Experiment Station, through joint funding of the National Institute of Food and Agriculture, U.S. Department of Agriculture, under award number 225575, and the state of New Hampshire.Funding also was provided by the U.S. Fish and Wildlife Service (Region 5, Division of Natural Resources, National Wildlife Refuge System), a Competitive State Wildlife Grant (u2-5-R1) via the U.S. Fish and Wildlife Service (USFWS) Federal Aid in Sportfish and Wildlife Restoration to the states of Delaware, Maryland, Connecticut, and Maine.

–University of New Hampshire
College of Life Sciences and Agriculture

Roots and all: Celebrating the dandelion