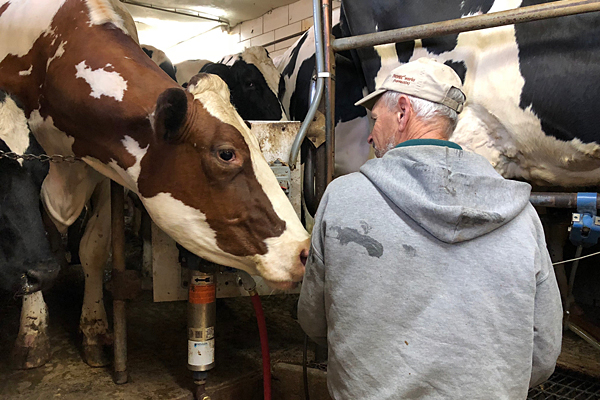 NEW BRUNSWICK, N.J. — David Lee, agricultural agent in the Department of Agriculture and Natural Resources of Rutgers Cooperative Extension, retired on April 1. Lee spent nearly four decades as a dairy/livestock extension agent in Salem County and for the state of New Jersey.

Lee received a bachelor’s degree in Animal Husbandry from Delaware Valley College and a master’s degree in Animal Industries from Penn State. Over his long career at Rutgers, he expanded his area of expertise to include various aspects of agriculture economic development throughout the county, the state and beyond. He developed several educational programs on an array of topics related to overall livestock and feed crop production as well as crop insurance, animal waste management and financial management for growers. He was well regarded for his expertise on mastitis/somatic cell control, for which he gained regional, national and international recognition.

Considered a prolific “get it done” agent, Lee served as an agriculture leader and innovator who reached beyond his county borders to extend educational programs of value and impact to a vast and diverse audience. In 2014, he received both the RCE County Faculty Person of the Year Award and the NJAES Award of Excellence for Faculty.

He conducted many local and statewide programs on marketing and financial management and was considered an expert on the FINPACK financial tool. This resulted in enhancing activities at the Port of Salem and obtaining a USDA-Rural Development grant to support agricultural development in South Jersey. For over a decade, he was awarded a competitive grant of more than a quarter of a million dollars annually from the USDA-Risk Management Agency.

Lee has trained and mentored a number of students and assistants whom he employed over the years, many of whom have gone on to successful extension agricultural jobs.

On the verge of retirement, Lee commented, “I’m definitely ready to retire, but I’m not ready to stop doing the things I love,” emphasizing again his “get it done” attitude and commitment to dairy and beef farmers and his love for the agricultural industry as a whole.