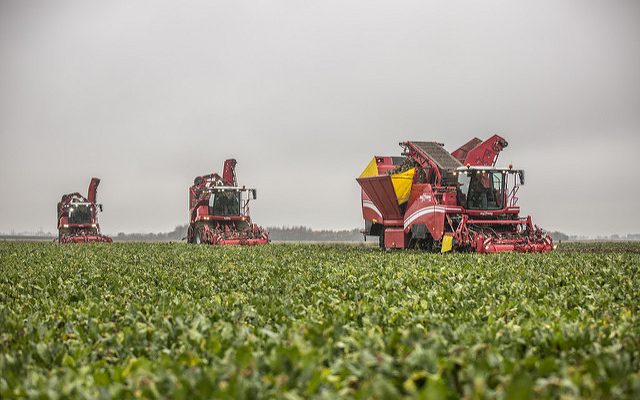 Manufacturers put all kinds of shields and knowhow into improvements to keep users protected. But they cannot be there when someone fails to replace a shield, or does not engage safety mechanisms, or takes a shortcut that enviably leads down a dangerous path. (Grimme Group via Flickr)

GOSHEN, Ind. — I have the feeling when people see a story written about safety, they quickly move on to other things. There are so many things to do that seem more important than being warned about taking the time to be safe. But the fact is, agriculture is a dangerous occupation. I have lost family, friends, and so have you. I know lots of people who have had serious injuries. So do you. We need to take safety more seriously in agriculture.

Equipment in this modern world is inherently safer than it was 40 years ago, I believe. Manufacturers put all kinds of shields and knowhow into improvements to keep users protected. But they cannot be there when someone fails to replace a shield, or does not engage safety mechanisms, or takes a shortcut that enviably leads down a dangerous path. That, my friends, is where your attitude comes in.

Former co-worker Vic Virgil used to say “Safety is an attitude.” I didn’t understood that well at first. But I see it now, and I believe Vic had it right. On some farms, safety is important above all else. They have adopted an idea that if we don’t operate safely, we are endangering our family. Not just from injury or death, but from financial ruin, or a lifetime of wondering how things could have been different, if only….

Sadly, I see other families that take safety less seriously. I wish I had a way to instill a burning desire into the hearts of at least one person on each farm to see that safety is a part of the job description. That safety is taught to each and every one of the children. That the priority is not just production of crops or meat or milk or eggs, but rather the safe production of those commodities for the benefit and improvement of the family and the environment. Leaving this world in a better way than when we entered it, so to speak.

I can’t say I am a perfect example. I nearly cut a leg off a few years ago when I took a short cut while chain sawing a small limb from a tree. I could have lost a leg, or my life, or lost a lot of income my family depends upon had the saw not stopped where it did. It was a wakeup call, reminding me that getting in a hurry, like so many things in life, tends to be what gets us mere mortals into trouble.