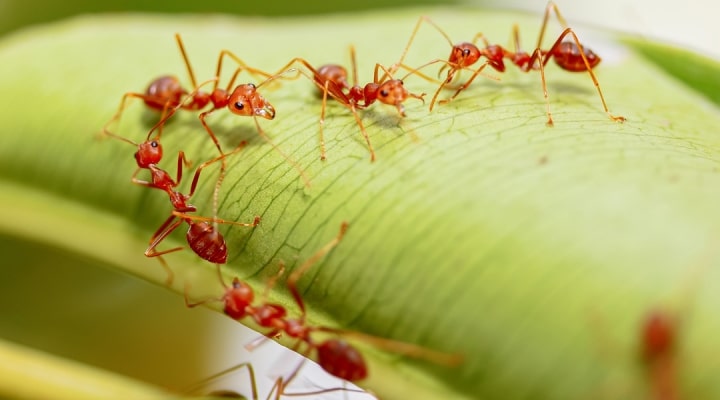 STILLWATER, Okla. — Agricultural producers in Oklahoma who want to sell their hay from operations in areas that have been quarantined to prevent the spread of imported fire ants need to follow all regulations set forth by the U.S. Department of Agriculture’s Animal and Plant Health Inspection Service.

In Oklahoma, the entirety of Pittsburg County was added to the USDA’s list of fire ant quarantine areas in June. There are now 21 counties in the state under quarantine for imported fire ants. Other counties in the quarantine area are Leflore, McCurtain, Pushmataha, Choctaw, Bryan, Atoka, Coal, Pontotoc, Johnston, Marshall, Murray, Garvin, Carter, Love, Stephens, Jefferson, Comanche, Cotton, Tillman and Jackson.

“People often want to sell or donate hay for the best of reasons, from taking advantage of market demand to more altruistically wanting to help other producers who may be lacking valuable feed resources for cattle and other livestock,” said Tom Royer, Oklahoma State University Extension Integrated Pest Management coordinator. “However, the laws are in place for good reasons.”

First among them is the demonstrable fact that imported fire ants are tough to get rid of once they invade an area. For example, the extensive wildfires of 2018 that hit northwestern Oklahoma, parts of southwestern Kansas and the Texas Panhandle burned up significant pasture resources and resulted in hay being donated from across the United States – some of it unknowingly infested with imported fire ants.

Three years later, Royer and cooperating specialists from the Oklahoma Department of Agriculture, Food and Forestry are still scouring pastures – and still finding – imported fire ants in northwestern Oklahoma, despite the best efforts of producers, Extension educators and ODAFF personnel to eradicate them.

Imported fire ant nests are akin to small cities, sometimes containing as many as 200,000 ants. When young queens mature in communities with more than one queen, they fly off with males to create new nests – a behavior helping to explain why imported fire ants can be so difficult to eradicate from an area.

“Getting rid of them can be a long, hard process, even though control options are well known, and most producers and community officials are willing partners in trying to eradicate the fire ants,” Royer said. “The good news is we’re finding far fewer fire ants in northwestern Oklahoma, generally only around the Laverne area these days.”

Imported fire ants can also damage field crops, vegetable gardens and vineyards, resulting in significant economic loss. The ants are aggressive when their nest is disturbed. If provoked, they swarm the perceived intruder, anchor themselves by biting, and then sting repeatedly, injecting a toxic alkaloid venom.

“Cases of people dying from imported fire ant bites are rare but do happen in individuals who are allergic; even if you’re not allergic, the experience of being stung by a swarm is painful,” Royer said. “Swarms have been known to kill small wildlife, and even cause health complications in larger animals.”

According to ODAFF, baled hay that meets any of the requirements below is not regulated and has no movement restrictions:

“Stored hay bales not touching the soil are assumed to be free of fire ants,” said Kenny Naylor, ODAFF Consumer Protection Services director. “We will come by and certify their operation meets the regulatory requirements, as our schedules permit. We can even do this long-term for producers whom we’ve verified meet the requirements.”

Producers looking to get their hay certified as imported-fire-ant-free can contact ODAFF by email at joe.rackley@ag.ok.gov or by phone at 405-205-2709.

“The environmental conditions in northwestern Oklahoma wouldn’t seem to be conducive to the presence of imported fire ants, but we’re still finding them there,” Naylor said. “They’re among nature’s toughest creations. It’s best not to let them get a foothold in the first place.”