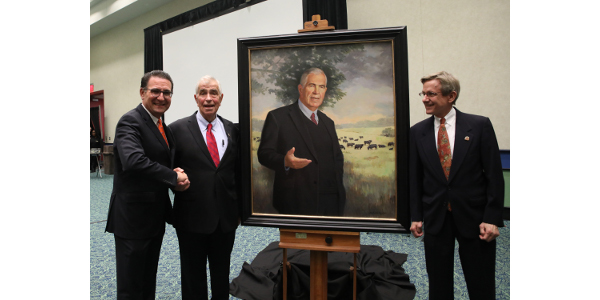 Tom Burke of Platte City, Missouri, has been selected as the 2017 inductee into the Saddle and Sirloin Portrait Gallery, largely considered the highest honor in the livestock industry. (Courtesy of American Angus Association)

SAINT JOSEPH, Mo. — Tom Burke of Platte City, Missouri, has been selected as the 2017 inductee into the Saddle and Sirloin Portrait Gallery, largely considered the highest honor in the livestock industry. The Saddle and Sirloin Gallery was established in 1903 and recognizes one individual each year for their lifetime of exceptional service to the livestock business, both nationally and internationally.

Burke, a fourth-generation cattleman, was raised on his family’s registered Angus operation in southeast Minnesota. His great-grandfather used the first registered Angus bulls in the late 1800s and early 1900s on the Burke Farm, which was homesteaded more than 130 years ago.

Burke has spent more than 50 years of his life traveling the country as a sale manager for the American Angus Hall of Fame, which is also home to the world’s largest collection of Angus memorabilia. Among his many accolades as a lifelong sale manager, USA Today named him “America’s Most Traveled Person” in 1994. Burke also served on the American Angus Association Board of Directors from 2013-2016.

During his tenure with the American Angus Hall of Fame, Burke has attended 10,000 Angus sales in 47 states, Canadian provinces and the Caribbean. Due to his commitment and dedication to the promotion of the Angus breed, Burke received the Promoter of the Year Award from the American Angus Association for 20 consecutive years.

Burke is a true Angus supporter in every way. Burke has never missed a North American International Livestock Expo (NAILE), held each November in Louisville, Kentucky, in it’s close to 45-year history. Nor has he missed a National Junior Angus Show (NJAS), where he served as the showmanship announcer from 1967-1973. Currently, Burke runs a herd of 200 registered Angus cattle and a flock of 40 Suffolk sheep.

The Saddle & Sirloin Club honored Burke and his many industry contributions during a special program and portrait unveiling Nov. 12 in conjunction with the NAILE at the Kentucky Fair and Exposition Center in Louisville, Kentucky.

“Being inducted into the Saddle & Sirloin Club has been one of the highlights in my life,” Burke said. “It’s like receiving the Heisman trophy of the cattle industry. It thrills me to no end to be inducted.”

Burke has established the Tom Burke Young Angus Achievement Awards Endowment Fund with the Angus Foundation at 3201 Frederick Avenue, St. Joseph, MO 64506. The Tom Burke Endowment Fund will support two Tom Burke Young Angus Achievement Awards of $1,250 awarded annually at the NJAS to one young boy and girl 8-13 years of age. The award winners will be selected for the award by a point system cumulating from their involvement in the National Junior Angus Association’s officially sanctioned, competitive show ring and contests held at the NJAS.

About the Angus Foundation
Established as a 501(c)(3) organization in 1980, the Angus Foundation remains focused on its mission to support Angus education, youth and research. The organization has presented more than $2.4 million in youth scholarships since 1998, and has also invested more than $1 million in beef cattle research throughout the past decade.

For more information, contact the Angus Foundation at 816-383-5100 or visit www.angusfoundation.org.

ANGUS MEANS BUSINESS. The American Angus Association® is the nation’s largest beef breed organization, serving nearly 25,000 members across the United States and Canada. It provides programs and services to farmers, ranchers and others who rely on the power of Angus to produce quality genetics for the beef industry and quality beef for consumers.

For more information about Angus cattle and the American Angus Association’s programs and services, visit www.angus.org.