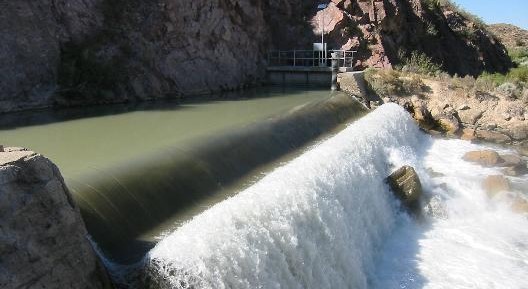 The California Department of Water Resources significantly increased releases from Lake Oroville even though unexpected erosion chewed through the spillway earlier this week, sending chunks of concrete flying and creating a 200-foot-long, 30-foot-deep hole that continues growing.

State engineers expect that water flowing out of the dam will catch up with the torrent flowing in from recent storms by sometime Saturday if they can continue the higher flows.

“Basically it’s going to be a triage situation. We know we’re going to have erosion going on but it’s in the best interest of the lake right now to be able to keep using the spillway to evacuate water,” said department spokesman Eric See.

That could save them from having to use an emergency spillway for the first time in the reservoir’s 48-year history.

They were still preparing for the possibility by clearing trees and brush from the emergency spillway down a steep ravine to minimize the debris that would flow into the Feather River.

They were reinforcing part of the overflow area with rocks stabilized with concrete and using helicopters to relocate power lines out of harm’s way.

Rescue efforts also continued for millions of hatchery-raised fish imperiled by muddy water flowing downstream alongside the damaged spillway after sections of its concrete walls collapsed earlier this week.

The cost could approach $100 million, though department spokesman Doug Carlson said the estimate by a department engineer is an early, ballpark figure. It is too soon to know with any certainty what it will cost, Carlson said.

Officials cheered improving weather that made it less likely they would have to use the emergency spillway.

“Glad to look out the window and see some sunshine,” See said at an afternoon briefing.

Torrential rainwater flowed into the lake overnight Thursday nearly three times as quickly as it could be released, bringing the lake to within six feet of overflowing into the emergency spillway.

Water was still entering the lake twice as fast as it could be released Friday afternoon. But the deluge was expected to continue easing into Saturday, low enough that officials can begin reducing the lake level to prepare for future winter storms.

Even if the lake overflows into the emergency spillway, officials do not expect the discharge to exceed the capacity of any channel downstream as the water flows through the Feather River, into the Sacramento River and to San Francisco Bay.

They said Oroville Dam itself is sound and there is no imminent threat to the public. The spillway was last repaired in 2013 and officials said they do not know why it eroded this week.

Located about 150 miles northeast of San Francisco, Oroville Lake is one of the largest man-made lakes in California and the 770-foot-tall Oroville Dam is the nation’s tallest.

The lake is a central piece of California’s government-run water delivery network, supplying water for agriculture in the Central Valley and residents and businesses in Southern California.

After years of drought, Northern California has endured several months of exceptionally wet weather that has forced Oroville and other lakes to release water to make room for more runoff.

At the state’s Feather River hatchery downstream from the crumbling spillway, workers on Friday were frantically scooping millions of tiny young native Chinook salmon out by hand for evacuation to a holding area away from the Oroville dam.

Dirt and debris washing downstream from the spillway have turned the hatchery’s water into mud, making it impossible for fish there to survive for any period of time, said Andrew Hughan, spokesman for the California Department of Fish and Wildlife.

On Friday, the rescuers were working by hand to catch and scoop up one by one the smallest four million salmon still remaining at the hatchery, along with 1 million steelhead trout eggs, Hughan said.

“We are in full rescue mode,” Hughan said.

The state hatchery inundated by the debris from the Oroville spillway produces almost a third of all hatchery-raised fish in the state, supporting struggling native fish species and a $4 billion salmon-fishing industry.

Gaping hole in spillway is growing