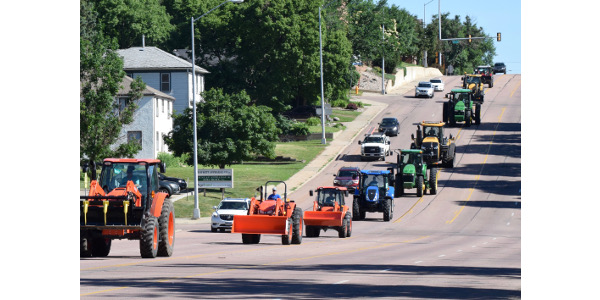 SIOUX FALLS, S.D. — Farm, biofuel and community leaders hosted a tractor rally in Sioux Falls Wednesday, where participants voiced their concerns about attacks on homegrown biofuels led by the chief of the Environmental Protection Agency (EPA), who is passing through the state this week.

“Farm income is down by 52 percent over the last five years, and the destruction of demand for South Dakota grains under Administrator Pruitt’s refinery waivers has to stop,” Knecht said. “We have 12,500 corn farmers in South Dakota who depend on stable ethanol markets for their livelihood. We would welcome Administrator Pruitt to give South Dakotans good news about allowing E15 sales year-round, but his track record shows that our concerns have fallen on deaf ears at the EPA.”

“The steep decline in farm income has made it harder and harder to drive rural investment and create jobs for the next generation of family farmers,” said Rep. Peterson, a fifth-generation farmer and assistant majority leader of the South Dakota House of Representatives. “Small and rural communities are the backbone of South Dakota, and they deserve better from the EPA. Our workers and farmers have made South Dakota a national leader in biofuel production, and we will not allow that leadership to be sacrificed by bureaucrats in Washington.”

As recently as last week, EPA Administrator Pruitt sought to advance regulatory changes targeting the Renewable Fuel Standard (RFS) that would harm South Dakota communities during the worst farm downturn in a generation. South Dakota leaders called on Administrator Pruitt to uphold the president’s commitment to the RFS, tear down regulatory barriers to higher ethanol blends like E15, and end corporate handouts that allow petroleum refiners to squeeze biofuels out of the market.

“Administrator Pruitt has been told time after time exactly what rural America needs,” Berven said. “Farm economies have been in free fall while Washington sits on a common-sense solution to build jobs and boost economic growth across Middle America at no cost to the taxpayer. A true ‘America First’ fuel policy starts by giving consumers the freedom to use more American-made biofuel. He needs to go back to Washington now and implement the president’s agenda.”

“Administrator Pruitt has shown a willingness to roll back harmful regulations. He needs to bring that same approach to the table with E15,” Johnson said. “Outdated regulations are denying millions of Americans the opportunity to use the fuel of their choice. American consumers deserve that freedom.”

Rural advocates made a similar call in Nebraska, where thousands gathered this week for the International Fuel Ethanol Workshop and Expo (FEW). Growth Energy CEO Emily Skor gave the keynote address, urging farmers to demand answers from the EPA during Pruitt’s visit.