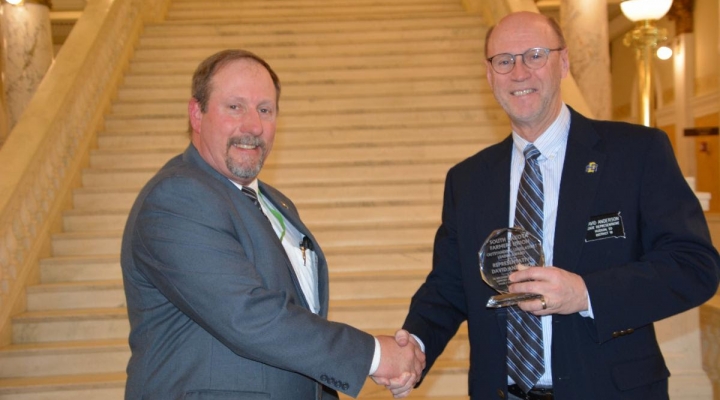 “Agriculture is the backbone of our state’s economy and yet in Pierre only a handful of legislators are actively engaged in production agriculture,” said Karla Hofhenke, Executive Director of South Dakota Farmers Union. “We appreciate David and Marty’s dedication to the family farmers and ranchers who raise the crops and livestock which fuels this industry.”

During the 2022 SDFU Legislative Day, Sombke will join with many South Dakota family farmers and ranchers who will take the opportunity to visit with legislators about the issues and policy that impact them. Farmers Union policy is developed and voted on by its more than 20,000 members.

“Yes, our organization has a lobbyist who represents our policy in Pierre. But it’s the personal stories that legislators want to hear. How exactly does this bill impact my family’s life on our farm?” explained Doug Sombke, President of South Dakota Farmers Union and a fourth-generation Conde farmer. “But Farmers Union Legislative Day is only one day of session. This is the reason we appreciate David and Marty and all the other representatives who understand agriculture and the concerns family farmers and ranchers have.”

“I told him, ‘I don’t have any axes to grind. I think the state is run extremely well. What I do enjoy and hope to do through service, is work to find solutions to problems,’” Anderson said.

Eight years later, Anderson says when it comes to solving problems in Pierre, he calls on his experience as a fifth-generation farmer and small business owner. He also owns and operates Canton Insurance Agency.

“Farmers do not do the same thing every day,” Anderson said. “Farmers have to figure out how to do all the different things that they do. And their success is due to time management and knowledge of many different aspects of farming.”

Anderson raises crops on his family’s farm which is located between Beresford and Canton. “Farming is my passion. It is what I grew up doing and I love it.”

Growing up, in addition to farming, Anderson’s dad, O.L. “Larry” Anderson, also served as a legislator. “I would go to Pierre and visit him from time to time and I found myself following the legislative process.”
Because of his agriculture background, Anderson says other legislators come to him with questions. “This is what makes a citizen legislature work. We are able to call on our career backgrounds to make decisions and answer questions for other legislators.”

He adds that legislators are always seeking more information so they can make the best decisions for South Dakotans. He encourages citizens to make time to visit with their legislators and share their story.
“When someone takes the time to come to Pierre, that tells me they have invested themselves in the issue,” Anderson explained. “In-person is much more effective than email. I get hundreds of emails. And many are the same.”

Throughout his years of legislative service, Anderson has had the opportunity to be involved in projects he sees as instrumental in helping move South Dakota agriculture forward.

“Agriculture is the lifeblood of our small communities. And farming has certainly changed over time. I was very actively involved in the Raven Precision Ag facility at South Dakota State University and also the Poet Bioproducts Institute which is currently under construction” said Anderson, who is a 1978 graduate of SDSU. “The Bioproducts Institute will bring together students, industry experts and scientists from SDSU as well as the School of Mines and Technology to work together to come up with new opportunities for agriculture.”

More about District 19 Representative Marty Overweg
Every decision Marty Overweg makes as a legislator, he first asks himself this question. “How will this impact the next generation of agriculture?”

“It is all about working for the next generation involved in our No. 1 industry,” he said.

Overweg grew up in New Holland working for area farmers and helping out in his family’s livestock feed business. Today, he lives only three miles from where he was raised. He raised cattle for more than 20 years, and stayed involved in the family feed business, expanding its nutritional focus and locations. Today, Overweg Feed also serves livestock producers in the Wagner area as Wagner Feed Supply. Until recent years, Overweg also cared for a cow/calf herd.

He says that when he is in Pierre, before making decisions, he relies heavily on his daily interaction with livestock producers as well as his first-hand knowledge.

“There are just certain things you cannot understand unless you calved out a bunch of calves in a snowstorm,” he said. “And I am not alone. When it comes to those of us who have a production agriculture background, we work together – it doesn’t matter if we are Democrat or Republican – our focus is what is best for agriculture.”

Overweg brings up the fact that what many citizens do not know is the fact that many times the Ag Committee is quite busy stopping bills that are brought in from outside interests and would be detrimental to South Dakota agriculture “Agriculture is under attack every day. Often someone will say, ‘introduce a bill that will help agriculture.’ To me, most of the time it is stopping a bill that will hurt agriculture,’” Overweg said. He goes on to explain. “It’s not that anyone will ever throw a monstrous bill out that says, ‘outlaw cows.’ But they will try to pass a series of bills that start nit picking at livestock producers’ rights.”
With so few legislators connected to agriculture, Overweg says he and the others who are, spend quite a bit of time providing information and answering questions. And again, every time, he says he is thinking about the future.

“I have five kids and 13 grandkids. All our children live in South Dakota. I want our children and grandchildren to be able to farm our family’s land when we are gone. When you make decisions this way, it does not matter what political party you are. You just do what is good for South Dakota.”

To learn more about South Dakota Farmers Union and the work the organization does to support family farmers and ranchers, visit www.sdfu.org.

More than 2,900 entries for the 2022 World Championship Cheese Contest