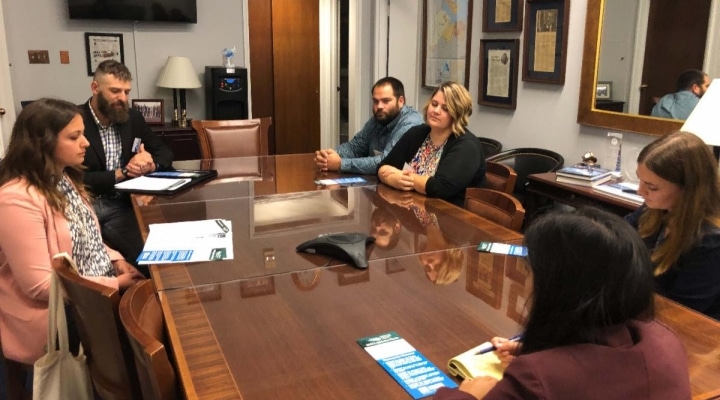 “Thank you to National Farmers Union. In many respects NFU has been the architect and designer in the work we are doing in this Administration in terms of farm country and ag and rural economies,” Vilsack said when he addressed the more than 250 family farmers and ranchers during a National Farmers Union D.C. Fly-In meeting held at the USDA. “You have articulated the need of the importance of small family farming operations, and the necessity of continuing to figure out creative ways to have more competitive markets.”

More than 40 South Dakota producers were among those listening to Vilsack’s comments. Members of South Dakota Farmers Union, these family farmers and ranchers saw the value in leaving their crops and livestock to make time for this annual advocacy effort.

“Year-round lobbyists speak on our behalf. But there is nothing more powerful than our personal stories about how policy developed in D.C. impacts us back home in South Dakota,” explained Doug Sombke, a Conde farmer and President of South Dakota Farmers Union.

Clark farmer, Gail Temple agreed. “Anytime a large group comes together, we have a louder voice and are more likely to be heard.”

Temple and her husband, Brad, raise crops and livestock. They attended the Fly-In because they are concerned about current markets and eager to see more oversight of the meet packing industry. “We are hoping to make a difference because we don’t think markets are fair for farmers,” Brad said.

In addition to meeting with USDA officials, Fly-In attendees also met with congressional leaders from across the U.S.

“Policy makers need to know what we deal with on a day-to-day basis,” explained South Hand rancher, Brett Stevens. “We pay full price for all our inputs. With the cost of fuel right now, it’s costing some farmers as much as $6,000 to $8,000 a day to turn a wheel.”

And even though meat counter prices continue to rise, Stevens and other livestock producers are barely able to break even after paying off input costs.

Many producers see increased oversight and enforcement of the Packers and Stockyards Act as a way to capture more profits for livestock producers.

“So much falls on getting away from corporate monopolies and returning to a circular economy,” said Jeff Kippley, an Aberdeen farmer who also serves as Vice President of National Farmers Union. “Increasing local markets is one thing, but in states like South Dakota where there are 4 million head of cattle and less than 1 million people, we know not every person is going to eat four beef a year, so we need fair markets to move those beef.”

As he considered the impact 250 family farmers and ranchers can have in three days of advocacy work, Kippley said, “This could be the most influential Fly-Ins because of the circumstances.”

The 2023 Farm Bill is among those circumstances. And getting it finalized and passed before the current Farm Bill expires is essential.

“The last Farm Bill was 18 months late and that was stressful,” explained Wayne Soren, Lake Preston farmer and Vice President of South Dakota Farmers Union. “We all know how slow things move in D.C., so it’s important that we are here to share why we need this Farm Bill completed on time.”

2022 marks at least 15 Fly-Ins that Soren has participated in. He says the face-to-face time with policy makers is valuable.

“When we sit across the table and look each other in the eye, and share “this is what I do as a farmer and this is how policy impacts me.” No lobbyist can tell them that,’” Soren explained.

Making a positive difference is the reason Harding County ranchers, Joe and Cindy Painter made time for the Fly-In. “If you sit at home and complain, nothing gets done. At least out here, we can try to do something productive,” Cindy Painter said. “So many of our neighbors, friends and family thanked us, telling us that someone needs to step up to get something done.”

Painter explained that even though cattle markets have risen slightly for cow/calf producers, the prices for finished cattle are not following. All the while, limited competition among the four packers, means their profits are up as meat prices in the grocery store continue to increase.

This message was carried forward when farmers and ranchers met with the Department of Justice Anti-Trust Division. To read more about this meeting, visit www.sdfu.org.

The Farm Bill may be another avenue to capturing fair markets for livestock producers. During meetings with South Dakota Senators Mike Rounds and John Thune, the senators discussed the possibility of making Mandatory Country of Origin Labeling (MCOOL) part of the Farm Bill.

“As much as COOL is a producer issue, it is also a consumer issue,” Kippley explained. “Everyone wants to know where their food comes from. The laws in our country ensure livestock are raised humanely and they are safe to eat. Other countries do not have the same safety standards.”

COOL is just one of several issues that is not limited to impacting family farmers and ranchers. De Smet farmer, Rob Lee explained how the Right to Repair Act, which if passed would give farmers access to software to help them repair their equipment. This software currently unavailable and only accessible to certified equipment mechanics.

“You buy the equipment, you own the equipment, but you do not own the software that runs the equipment – this does not make sense,” Lee said. “Interestingly, if this Act passes, it would apply to many other industries, including the cell phone industry. Who doesn’t own a cell phone?”

By spending time in D.C. meeting with policy makers, Farmers Union members were able to inform congressional leaders from more urban states on the consumer benefits of farm-friendly policy. The impact is not lost on policy makers from rural states. When Senator Thune greeted farmers and ranchers from South Dakota he said, “I appreciate you giving a voice to production agriculture across South Dakota and I appreciate what you do to not only feed this country, but the world.”

To learn more about the 2022 Fly-In and watch attendee videos, visit the South Dakota Farmers Union Facebook page or www.sdfu.org.