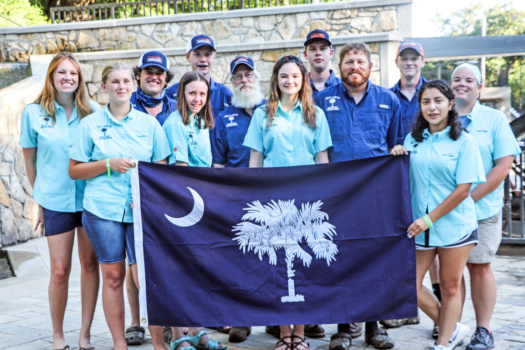 As one of two states in the nation with both a 4-H and Future Farmers of America (FFA) team in the National Wildlife Habitat Education Program Contest (WHEP) and with both teams posting stellar scores, South Carolina’s young people made their mark on the national stage after an extended absence.

JUNCTION CITY, Kan. — As one of two states in the nation with both a 4-H and Future Farmers of America (FFA) team in the National Wildlife Habitat Education Program Contest (WHEP) and with both teams posting stellar scores, South Carolina’s young people made their mark on the national stage after an extended absence.

“The future of wildlife conservation is in good hands,” said Oconee County 4-H agent Mallory Dailey. “Where else can you find over 70 youth from across the country representing their states at the highest level and putting their wildlife knowledge to the test?”

All told, 17 teams of three to four youth from 15 states tested their wildlife knowledge in a friendly competition.

Sydney Gambrell of the South Carolina FFA team said traveling to Kansas was an eye-opening experience because of the opportunity to see a different ecoregion outside of her home state.

“I became involved because I enjoy being able to take knowledge learned in the classroom, such as South Carolina wildlife and biology, and apply it to real life scenarios,” she said. “Some of my favorite moments were simply exploring the tallgrass prairie found in Junction City, Kansas, with my teammates. I would encourage any curious student to participate in the Wildlife Habitat Education Program for the opportunity to not only become more knowledgeable on their state’s wildlife, but also to work as a team with fellow students.”

“I chose to become involved with the program because I’ve always been very interested in wildlife, and particularly birds and other animals,” said Cox, the highest scoring individual for South Carolina 4-H. “I enjoyed it immensely; it was a really valuable experience from the perspective of being able to learn about not just the biology of the animals, which was my favorite part, but also how to manage them. The trip was also very fun. There were so many different activities we could do there, the competition was also very interesting and then just seeing the other people who were there doing it was a valuable experience.”

Both teams earned the right to compete at nationals with their performance at the South Carolina State Wildlife Habitat Education Program Contest in April at the National Wild Turkey Federation in Edgefield. The contest was held in conjunction with Clemson Extension, Clemson University department of forestry and environmental conservation and private industries.

But, according to Dailey, the trip wasn’t all about fierce competition.

“While out in Kansas, youth had the opportunity to explore one of the last remaining areas of tallgrass prairie in the entire world,” she said. “The tallgrass prairie once covered over 170 million acres and now less than 4 percent of its historical range remains.”

The contest took place in the Flint Hills region of Kansas, which is home to the first land-grant university in the United States: Kansas State. The primary land-grant institution in South Carolina, Clemson is charged with improving the quality of life of South Carolinians by providing unbiased, research-based information through an array of public outreach programs, such as the 4-H program for youth development

Dailey said not only did the team members learn from some of the top extension wildlife specialists in the country, but they also saw many new wildlife species and plant species that are not found in South Carolina.

“Preparing for a wildlife contest that features species like greater prairie chickens and ring-necked pheasants was not the easiest,” she said. “Not surprisingly, there are not many prairies left in South Carolina and we had to use our imagination a bit to picture the vast rolling hills of grasslands from ‘Little House on the Prairie’ or the old computer game ‘Oregon Trail.’ Thankfully, we were able to utilize the Piedmont Prairie Garden of the South Carolina Botanical Gardens for practice before we headed out to Kansas.”

And while the South Carolina group visited the nation’s first land-grant university, they also had the chance to experience many other firsts — most of the team had never been to Kansas prior to the trip and many had never even been on a plane before. Along the way, they experienced some adventures along the way, such as eating Kansas City barbecue and visiting the Tallgrass Prairie National Preserve.

“Most importantly, by participating in a program like WHEP, the kids are exposed to a new career path and gain an appreciation for wildlife and their habitat,” Dailey said. “They also learn a little more about the Cooperative Extension Service and the opportunities that are out there for youth who are interested in the outdoors and wildlife. It certainly will not be 20 years until the next time that South Carolina has a team participate in the National Wildlife Habitat Education Program Contest and we hope to leave our mark next year.”