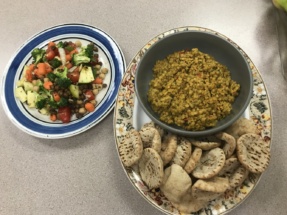 Lentils, one of the foods sometimes called “poor man’s meat” are an excellent source of plant protein, but some Clemson University researchers are working to make lentils even more nutritious and expand their growing region into South Carolina. (photo provided by Clemson College of Agriculture Forestry and Life Sciences)

CLEMSON, S.C.- — Lentils, one of the foods sometimes called “poor man’s meat” are an excellent source of plant protein, but some Clemson University researchers are working to make lentils even more nutritious and expand their growing region into South Carolina.

Dil Thavarajah, a plant and environmental sciences associate professor; and Stephen Kresovich, Robert and Lois Coker Trustees Endowed Chair of Genetics, have received a $150,000 seed grant from the United States Department of Agriculture’s National Institute of Food and Agriculture to study how growing lentils in different locations can bolster the plants’ nutritional quality.

This research could also broaden lentil production in the United States beyond its two principal growing regions — the northern Plains, comprising Montana, North Dakota and South Dakota; and the Palouse Region, which includes eastern Washington, northern Idaho and northeastern Oregon — into the Southeast and even South Carolina.

Doctoral student Nathan Johnson came to Clemson all the way from Grand Rapids, Minnesota, so he could work with Thavarajah and Kresovich on this project. Johnson, who plans to one day be a doctor, plans to develop a lentil genetic map on prebiotics for use in helping combat obesity.

“Most doctors devote little time to the study of nutrition, yet nutrition is an essential part of human health,” Johnson said. “In studying at Clemson, not only am I learning about the nutritional benefits of pulses (crops), but I also am engaging in research that promotes more nutritious foods to combat obesity and other non-communicable diseases. Ultimately, both the knowledge I am gaining now and my future practice as a doctor will help in the effort to alleviate human suffering and promote human health.”

Lentils are pulse crops, part of the legume family harvested for their dry seeds like beans, chickpeas and field peas. They are high in protein and dietary fiber and low in fat. Lentils also are packed with folate, iron, phosphorus, potassium, selenium and manganese.

“We have found lentils grown in the United States provide 15 grams to 20 grams of prebiotic carbohydrates for every one-half cup serving,” Thavarajah said. “Lentils are an excellent source of prebiotics. A diet rich in prebiotic fiber and low in calories is important in combating obesity by changing gut (digestive) health.”

Current lentil lines produce well in cool weather, May to September in current growing regions. Future lines for South Carolina would be grown from late November to early May. According to the South Carolina Department of Natural Resources state climatology office, the state’s annual average temperature varies from the mid-50s in the mountains to low 60s along the coast.

Growing pulse crop such as lentils also can benefit agricultural soil and decrease the need for fertilizers by decreasing nitrogen and water use and breaking disease and weed cycles. Rotating pulse crops with wheat, for example, can provide significant ecological benefits, such more effective nitrogen fertilizer management and nutrient supply management. This could be a big deal for the state because, as the South Carolina Department of Agriculture reports, wheat is one of the top 10 commodities grown in the state. Latest crop figures from the USDA-National Agricultural Statistics Service show 90,000 acres of wheat were planted in South Carolina in 2017.

Using this study as a foundation and with their combination of expertise, Thavarajah and Kresovich say their work could lead to new lines of research into nutrigenomics, the study of how genes and nutrients interact.

“This grant will use lentil as a model organism to generate phenotyping data,” Thavarajah said. “Future studies will use this data to understand how prebiotic carbohydrate genes enhance nutritional quality. This not only will advance the field of plant breeding but also will have a great impact on global food security.”

Phenotyping data includes information about the physical and behavioral traits of an organism; for example, size and shape, metabolic activities and patterns of movement.

This study is projected to last two years as the researchers seek to characterize the type and concentration of prebiotic carbohydrates, such as sugar alcohols and starches, to create a genetic map for growing lentils. Thavarajah’s team also will work with a USDA-Agricultural Research Services lentil breeder in Washington state and an international lentil breeder from the International Center for Agricultural Research to identify genes responsible for increases in lentil nutritional quality and productivity.

Although this project is specific to lentils, Thavarajah said methods used will be applicable to other legumes as well as cereal nutritional breeding efforts in North America, Southeast Asia and Africa.