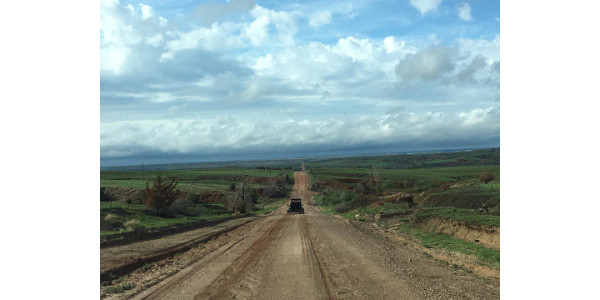 A photo from the trip posted to Facebook by Dean Hutto on April 21. (Dean Hutto via Facebook)

The 28-year-old returned to his family’s farm in Providence full time about six years ago to carry on the tradition with his father, Barry, and his brother, Richard.

Despite the fifth-generation farmer’s background, Hutto wasn’t prepared for October 2015. That’s when moisture from a low-pressure system and an Atlantic hurricane combined to create a natural disaster.

The storm left Hutto’s fields under 18 inches of water.

“I have been affected by natural disasters and I know how depressing and trying those times can be,” he said.

Memories of the disaster prompted Hutto and seven other members of the S.C. Farm Bureau Young Farmers and Ranchers Association to leave their loved ones for six nights. They traveled 2,800 miles across seven states to help their colleagues, whose property was devastated by historic March wildfires.

The South Carolina farmers departed in April for Kansas and Oklahoma to help reconstruct fences for ranchers.

Hutto said it was “a little overwhelming” when he arrived in Gate, Oklahoma.

The blazes were one of a series of fires fanned by high winds. They contributed to the deaths of seven people and forced thousands to evacuate.

The fires resulted in hundreds of thousands of acres being burned. Cattle and swine died in the tens of thousands.

The wildfires have been identified by ranchers as their Hurricane Katrina.

The men were able to stay at the home of a rancher near the state line in Englewood, Kansas.

“The rancher we helped lost his shed, the majority of his equipment and almost his house,” Hutto said. “The fire was so hot and so close to his house that it melted the satellite wires on the side of his house and some of the siding.”

Hutto said they started early in the day, with two work crews moving methodically through their work.

“One drove posts with a tool someone let us borrow and the other strung the barbed wire,” he said. “We were pretty efficient and got four miles of fence up.”

They also drove more posts for the locals to continue working with later.

Hutto said the crew had a hydraulic post driver, which was more efficient than what the locals had access to.

“It was cold. It rained one day and the wind was relentless out there,” he said.

As a row crop farmer, Hutto had to learn what the process was.

“It didn’t take long. It wasn’t very hard work, just a lot of walking,” he said.

He said the hilly terrain was a challenge, requiring time-consuming efforts to ensure the fencing was anchored appropriately.
Despite the challenges, he was glad to help.

“They were very gracious about what we were doing,” Hutto said. “It reminded me of how thankful I am for the linemen who come in and help us restore power after a disaster. All the locals thanked us numerous times.”

Hutto said he also felt called to go as a fellow farmer.

“It’s just a brotherhood, so to speak,” he said. “Lots of people think their meal grows in a grocery store and that food is a part of life that just appears on a plate.”

“I don’t think what I do is any more important than the teachers who shape the minds of our youth or the doctors and nurses who heal our bodies or police officers who keep us safe,” he continued. “But I do know that we as farmers and ranchers only make up 1 percent of the population and we feed 100 percent of the world.”

Hutto kept people abreast of his journey via Facebook.

On the 23rd Hutto posted “heading home from Oklahoma.”

“Lots of fence built and lots of friends made. We only put a small dent in the destruction from the fire,” he wrote. “There are still miles upon miles of fence that was destroyed that will have to be rebuilt. Please remember these ranchers as they try to rebuild the little piece of heaven on earth they call home.”

Hutto said his wife of eight months, Sara, “never batted an eye” about him going to help.

“She knew it was something I felt like I needed to do and she supported that,” he said.

For Hutto personally, the trip was just the right thing to do.

“We do the same thing in this community,” Hutto said. “Mr. Walter and Bryan Dantzler helped me finish harvesting my peanuts the day before the hurricane last year.

“I had so many of my friends from the Upstate call after the flood to offer help but there was nothing they could do.”

The trip was made possible through a donation from the Executive Committee of the South Carolina Farm Bureau Federation as well as donations from several county Farm Bureaus.

About $14,000 was raised by the various county Farm Bureaus over a 30-day period to make the trip possible. Donations of supplies also were made by individuals and companies.
___
Information from: The Times & Democrat, http://www.timesanddemocrat.com

— Gene Zaleski, The Times and Democrat of Orangeburg via The Associated Press