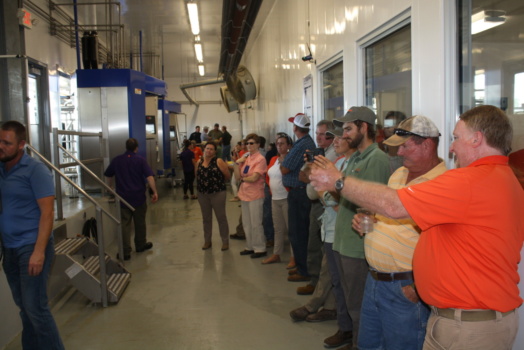 Dairymen are a hardy lot known for tending their herds through the worst weather and toughest conditions.

CLEMSON, S.C. — Dairymen are a hardy lot known for tending their herds through the worst weather and toughest conditions.

But even the hardiest dairyman can be forgiven for breaking out his handkerchief and dabbing the sweat from his brow during the unveiling of the new robotic milking system Oct. 3 at Clemson University’s LaMaster Dairy Farm.

The cows were in the comfort of their freestall barn where they were being fanned, spritzed, fed and gently milked in the only university robotic milking facility in the Southeast, and looked upon the proceedings as if to say, “What’s wrong with y’all?”

“We started [designing the dairy] about five years ago, and it was designed for total cow comfort,” said Steve Waggoner, Clemson University dairy farm manager. “It milks the cows individually and you can get individual information on each cow. The robotics run 24/7. It will milk a cow now, two hours from now or ten hours from now without having to use manual labor in shifts.”

The DeLaval VMS V300 fully robotic milking system is a guided milking system that allows each cow to be milked according to her individual needs and capacity. The cows are averaging about three milking visits per day over the entire herd. Fresher cows that have calved more recently are visiting the milking stall up to six times per day.

“The cows can come and go without people moving them manually and causing them more stress,” Waggoner said.

“It tells you when a cow is off in milk production so you can flag her to see if she’s getting sick. So the technology helps us take care of problems with the cows quicker and faster and maybe diagnose and treat the animals before they really have a lot of problems,” Waggoner said.

John Andrae, assistant director of Clemson’s research farms, told the crowd that the new LaMaster Dairy has an automated system that washes and recycles the sand that’s used for bedding.

“Over the past year we’ve only had four truckloads of sand delivered. In the previous dairy, we would have had 48 truckloads delivered in a year. That’s a big cost and environmental savings in not just sand but in the fuel used by the trucks traveling from Tennessee to deliver that sand,” Andrae said.

Watson Dorn, owner of Hickory Hill Milk in Edgefield, said Clemson’s robotic dairy will be an exemplar that will allow dairyman throughout the Southeast to see for themselves how technology can benefit their operations.

“The dairy industry is heading in this direction. In fact, my dairy is in the process of changing over to a robotic system. The robotic dairy here at Clemson will give other dairymen throughout South Carolina and the Southeast the opportunity to learn about this technology,” Dorn said.

The technological advancements in dairy production come at a time when the dairy industry is suffering from low profitability caused by a number of factors, including high labor costs.

Dorn said more than 1,600 dairies have gone out of business so far in 2019 and he predicts that number will likely reach 2,000 by January 2020. That comes after the U.S. Department of Agriculture reported that licensed dairy farm numbers in the country declined by 2,731 farms in 2018, a drop of 6.8 percent.

Clemson University President Jim Clements said Clemson’s high-tech dairy is not just a showpiece but another way in which the university is continuing its commitment to support the South Carolina agriculture industry.

“Clemson has been and will always be a university that is honored to play a significant leadership role in the field of agriculture. This new technology will help us play an even greater role in the dairy industry and is the embodiment of our land-grant mission moving into the 21st century and beyond,” Clements said.

George Askew, vice president of Clemson Public Service and Agriculture, who has been at Clemson for 47 years, echoed Clements comments.

“When I first got accepted to come to Clemson as a freshman in 1972, I was kidded about going to a ‘cow college.’ Well, I was proud of that then and I’m even more so today. What can be a finer calling than to work at a university that contributes to the efforts of the agricultural community as it works every day to give us all high-quality and abundant food,” Askew said.