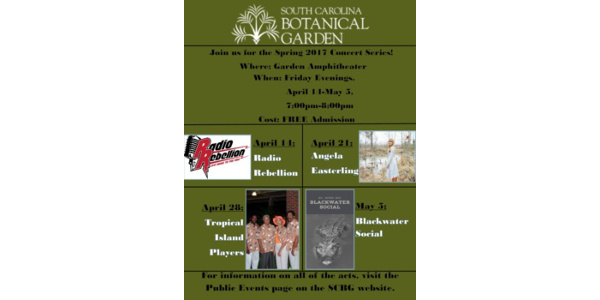 CLEMSON, S.C. — The South Carolina Botanical Garden has set the lineup of artists for its annual spring concert series.

Artists will perform on Friday evenings in the Garden’s amphitheater. There are seats in the amphitheater, but visitors can bring blankets or stadium chairs. They also can bring picnic dinners. Admission is free (a $5 donation is suggested) and drinks will be available for purchase. For more information, go to www.clemson.edu/scbg/events or call 864-656-3405.

Angela Easterling
7-8 p.m. April 21
Angela Easterling is a country/folk/alternative singer-songwriter who lives with her partner and their two young sons on the South Carolina farm that has been in her family since 1791. She is a three-time Kerrville New Folk Finalist, a Telluride Troubadour Finalist and a two-time Wildflower Performing Songwriter Finalist. Her most recent release, 2015’s “Common Law Wife,” went all the way to No. 1 on the Roots Music Report Americana Country Airplay Chart and remained in the Top 5 on that chart for nearly two months. It closed out the year at No. 12 on the Top 100 albums.