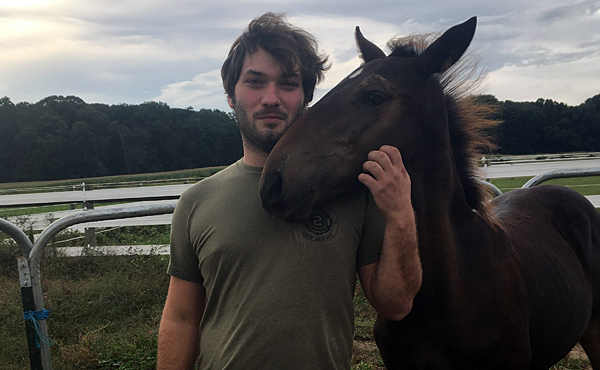 With his love of being outside doing hands-on work, Geoffrey was able to tie his need of a non-traditional office setting with his passion for horses, and decided to major in Equine Science to make a career out of it. (Rutgers University)

NEW BRUNSWICK, N.J. — Each year, a Rutgers senior majoring in Animal Science, with an equine emphasis, is awarded the Ernest Bell Memorial Scholarship by the New Jersey Department of Agriculture’s Equine Advisory Board. This year, Dr. Karyn Malinowski and Dr. Kenneth McKeever had the honor of selecting Geoffrey Leonberg for this scholarship.

During his first year at Rutgers, he took the “Horse Management” course being taught by Dr. Sarah Ralston. While Geoffrey never saw himself as being stuck behind a desk at a typical office job, this experience gave him hope that he would have other options.

With his love of being outside doing hands-on work, Geoffrey was able to tie his need of a non-traditional office setting with his passion for horses, and decided to major in Equine Science to make a career out of it.

After excelling in the courses that were offered, and finishing every equine course he could find at Rutgers, all while helping out at the Equine Science Center treadmill research lab, Geoffrey wanted more. During his junior year, he became interested in equine reproduction. While there aren’t any courses currently offered on this topic at Rutgers, that didn’t deter Geoffrey who looked for other options that he would have as an Animal Science major.

Discovering that in 1997 a Memorandum of Understanding was created between Rutgers University and Delaware Valley University so that students in the equine and dairy fields could further their education through courses from the partnering college, he hoped that this would be an option for him.

Inspecting the course catalogue, Delaware Valley University’s course on “Mare and Foal Management” seemed like a perfect fit for what he was interested in, but he wasn’t sure of how to proceed with signing up for the course, and what it would entail. After months of conversations with the academic program directors from both universities, he was granted permission from the president of Delaware Valley University to honor the memorandum and further his education.

So in his junior year, Geoffrey went to what would become one of his favorite classes. Twice a week he would wake up at 6 a.m. to drive to Delaware Valley University to attend lecture, lab and care for his pregnant mare. Being able to track his mare’s pregnancy, ultrasound, foal out and train a Standardbred during this course helped Geoffrey decide exactly what he wanted to do in the equine industry–become a farrier and breed Standardbred racehorses.

During the summer between his junior and senior year, Geoffrey apprenticed with an American Farrier’s Association Journeyman farrier in the D.C./Baltimore metro area. By day, he was pulling and finishing shoes, and by night he was working at the forge.

Wanting to provide the best horse care that he possibly could, from farriering to breeding, Geoffrey returned to Delaware Valley University for a course on “Equine Biomechanics and Locomotion.” This would allow him to better understand equine movement, which would be of extreme value as he pursues a future career in farrier science.

When not taking courses at DVU or Rutgers, Geoffrey spends his time as a Fireman/Emergency Services Officer for Rutgers’ University Public Safety.

After graduating in May, Geoffrey plans to continue his farrier apprenticeship for six more months, and then continue his education at Cornell University’s farrier program.