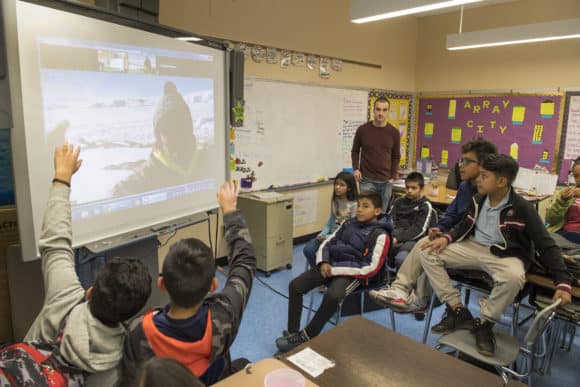 Each week, researchers with Rutgers ENIGMA teach astrobiology lessons to children in grades four through eight at McKinley Community School and Greater New Brunswick Charter School. Astrobiology is a relatively new interdisciplinary field that seeks to understand whether life arose elsewhere and whether we can detect it. (Photo provided by Rutgers University)

NEW BRUNSWICK, N.J. — Josue, a 5th grader at McKinley Community School in New Brunswick, imagines an alien could evolve and thrive in the harsh elements of Jupiter by harnessing the ability to eat gas. Then, he uses clay to sculpt the creature and names his lifeform “Jomama.”

“We asked the kids to show us what an alien on a given planet might look like and what qualities it should possess after assigning them a planet,” said Kenneth McGuinness PhD., an NIH INSPIRE postdoctoral associate researcher with Rutgers ENIGMA, a NASA-funded research team focused on discovering how proteins evolved to become the catalysts of life on Earth. “Josue gave Jomama the ability to eat gas because Jupiter is a gaseous planet. You never know – some form of Jomama might be discovered one day.”

Each week, researchers with Rutgers ENIGMA teach astrobiology lessons to children in grades four through eight at McKinley Community School and Greater New Brunswick Charter School. Astrobiology is a relatively new interdisciplinary field that seeks to understand whether life arose elsewhere and whether we can detect it.

Students began the lessons by answering a simple question: Are you alive and how do you know? From there, students were sent outside to pick two things – one thing they consider alive and one thing not alive.

“Kids today don’t go outside as much,” McGuinness said. “Lunch times are reduced and students don’t have much playtime anymore. We’re bringing them outside and they are seeing the diversity of life in a way they never noticed. There’s a pond filled with crickets behind McKinley and they noticed the molting of cicada on a tree and they were amazed. It gets them thinking about what life is. Is life green? Would alien life look like us? People at NASA are asking the same questions.”

The students, who called themselves the “ENIGMA Club,” participated in activities such as making solar systems from beads, analyzing organisms under a microscope, watching organisms grow on a petri dish, analyzing a 3D model of a protein and chatting via Skype with Rutgers researcher Kasey Walsh, who is currently on assignment in Antarctica.

“Of course, the students wanted to know if she had encountered any penguins, but they also learned that life can exist in extreme environments, including on the coldest continent on Earth,” McGuinness said, adding that the elementary school outreach efforts have inspired him to pursue a career in education. “If they see themselves doing this science now, they can take this confidence with them as they get older and know there are people in the science community who can help them succeed.”

The classes were created after successful “Family Science Nights” in spring 2019, which were offered to kindergarten through eighth grade students at the same schools. Because the schools are predominantly Hispanic, translators helped parents and students get involved.

“Research has shown that family involvement increases the quality of grades for students, and it increases a child’s commitment to schoolwork,” said Alesha Vega, community engagement and outreach coordinator for Rutgers’ 4-H science program in the Department of Marine & Coastal Sciences. “So, when all of the parents came out and were so involved, we knew this was really going to benefit the kids. And this semester’s classes are just taking it to the next level. We’re introducing students to complex science topics, but also building their confidence and inspiration” to perhaps pursue a career in the sciences.

According to McGuinness, the classes did more than introduce kids to one of the fastest-growing fields of science. It also opened up their imaginations.

“You only need one experience with something to become interested in it, and each lesson encourages them to explore their imagination,” he said, adding that Rutgers ENIGMA may expand the program into other elementary schools. “If their imagination is nourished and creativity is encouraged, then they can learn that they have what it takes to work in this field and explore the world for scientific discovery.”