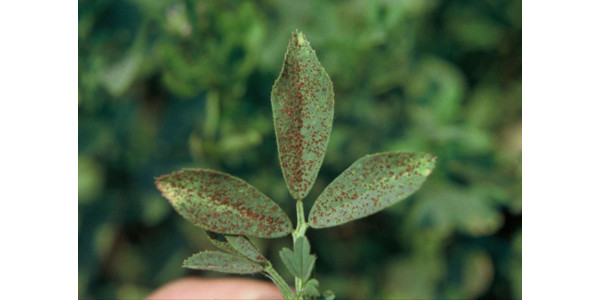 LINCOLN — Warm, humid weather has caused rust to form in many alfalfa fields throughout our region. Rust rarely infects our alfalfa before mid-July because it won’t overwinter here.  But if the summer is humid, like we’ve experienced this year, rust blown up from the south can infect our fields.

Rust usually causes little damage in fields harvested monthly, but more mature alfalfa or alfalfa grown for seed can be injured and defoliated by rust.  So one way to minimize damage from rust is to harvest infected fields early.

Rust can cause damage several ways. Heavy rust infections can cause leaf drop and defoliation of alfalfa if plants aren’t cut on a timely basis.  This type of injury will greatly reduce seed yield and quality.

In addition, rust-infected hay sometimes causes allergic reactions in animals, more often with horses than with ruminant livestock.  Rust also lowers the digestibility of hay, and this lower energy value often isn’t detected well by standard laboratory tests. If you feed rust-infected hay, your animals may not get as much energy from it as expected.

One of our biggest concerns is when late summer seedings become infected with rust.  Infected seedlings may be weakened and not develop as much winterhardiness as normal, making them more susceptible to winterkill. If this is the case in your fields, plan to monitor them closely next spring to determine early if you need to change your cropping plans.

There’s nothing you can do economically to control rust so monitor, harvest, and adjust plans to minimize damage.

Why are corn kernels germinating on the ear?