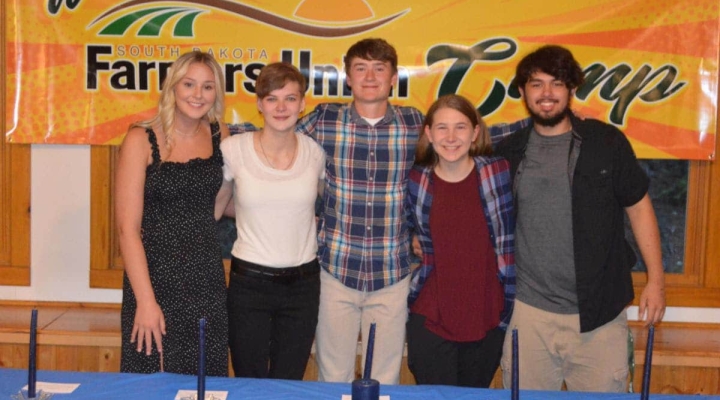 But it’s not their parents that kept the high school seniors engaged and signing up to attend Farmers Union camp every summer since they were 8.

Eitreim and Hanson will return to camp summer 2023, this time not as campers, but as camp organizers and counselors. The teens were selected through an application and interview process to serve on the Junior Advisory Council along with three other teens: Chaz Blotsky, Mission; Jayda Walton, Mitchell; and Garrett Kruger, De Smet.

Together, the Junior Advisory Council members will help plan and organize the 2023 Farmers Union State Leadership Camp. They will also serve as camp counselors throughout the week-long leadership camp.

“Planning camp will take a lot of communication because we live in different areas of the state,” Kruger said. “But I am definitely excited to plan camp with my friends.”

As a way to educate youth on the cooperative business model, during camp youth operate cooperatives together. This year, Kruger was part of the Housing Cooperative. “Campers needed to go through us if they wanted to switch rooms to be with their friends,” Kruger explained.

Time with friends is among the reasons Blotsky makes time for camp each summer. “I call my Farmers Union friends, ‘lifelong friends,’” Blotsky said. “We get to know each other so well during the week of camp. Everyone listens to each other. No one is left out.”

Blotsky said in his role serving on the Junior Advisory Council, he is eager to bring back and strengthen camp traditions and he will work to encourage new campers to attend.

Expanding camper numbers also tops Walton’s list of goals. “I have some ideas on how to make it grow – like promoting it in schools,” she said. “I also look forward to serving as a leader at camp and working to make it a fun experience for every camper.”