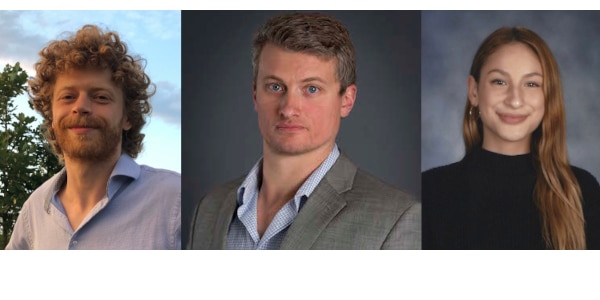 Forrest Humphrey, Anthony Pahnke, and Michelle Ramirez-White have signed on to Wisconsin Farmers Union as Rural Organizers for the grassroots membership organization.

CHIPPEWA FALLS, Wis. — Harkening back to its roots, Wisconsin Farmers Union (WFU) has hired a team of organizers. Forrest Humphrey, Anthony Pahnke, and Michelle Ramirez-White have signed on as Rural Organizers for the grassroots membership organization.

“Farmers Union was born over a century ago out of a movement of farmers who recognized the need to organize to stand up against the corporate interests that were driving farmers off the land,” said WFU Executive Director Julie Keown-Bomar. “Given the compounded issues that our family farms face today, we need collective action more than ever to create meaningful change and revitalize rural Wisconsin.”

Humphrey brings five years of experience in rural organizing to WFU. He organized in rural Iowa and Nevada in 2020 and also spent years canvassing as a volunteer around La Crosse on local electoral campaigns and issues such as healthcare and tenant’s rights.

Humphrey grew up in the heart of Vernon County in southwest Wisconsin. He graduated from Antioch College in Ohio in 2015 and then bounced around the country from Ohio to Chicago to Hawaii, before finding his way back to Wisconsin. He recently settled in La Crosse and in his free time enjoys spending time in nature, taking in the beauty of the Mississippi River and surrounding bluffs.

“I’m passionate about building strong local constituencies in rural Wisconsin to fight back against the corporate power that has taken hold in our state,” Humphrey said, “and I’m thrilled to put my organizing skills to work on behalf of the Wisconsin Farmers Union.”

Pahnke grew up on his family’s dairy farm near Fond du Lac, where he developed a soft spot for Jerseys. He left the farm to attend UW-Madison, then headed off to Minnesota, California, and places in between. Along the way, Pahnke became active in the Family Farm Defenders, and in various immigrant rights movements, especially in the Midwest.

“There’s honor in family farming,” Pahnke said. “Finding healthy ways to cultivate that while respecting workers, the Earth, and community is something that keeps me up at night.”

Pahnke recently returned to Fond du Lac with his family. The cows are gone, but the farm remains. Alongside his wife and two kids, his parents, two uncles, and 91-year old grandma, Pahnke is figuring out how to turn a retired dairy farm into a vegetable/flower operation. The family can be found at the Fond du Lac farmers market on Saturdays, slinging salsa and tacos.

Ramirez-White grew up in Los Angeles but moved to Wisconsin to attend UW-Madison, graduating with a degree in History and Political Science in May. Before being hired at WFU, she performed outreach work during the presidential election and for Madison non-profit Freedom INC.

“What drew me to working for WFU is their commitment to member-driven, issue-focused work,” Ramirez-White said. “I am so excited to be able to have meaningful conversations with members and learn from them what rural communities need and how Farmers Union can work to help them.”