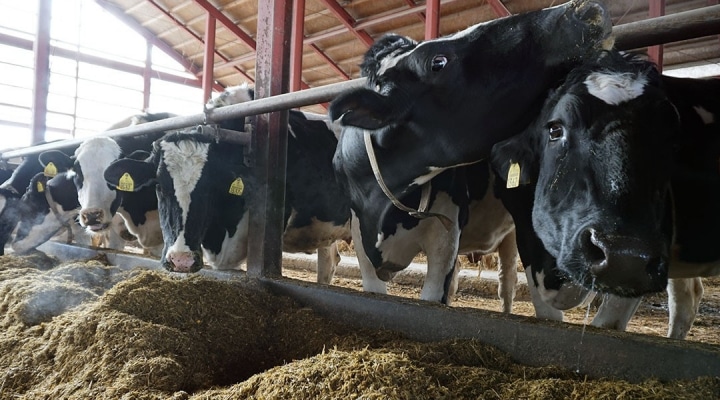 New research from the University of Illinois shows dry dairy cow diets containing consistent energy levels and the rumen-boosting supplement monensin may be ideal during the dry period. (Courtesy Photo)

URBANA, Ill. — Getting nutrition right during a dairy cow’s dry period can make a big difference to her health and the health of her calf. But it’s also a key contributor to her milk yield after calving. New research from the University of Illinois shows diets containing consistent energy levels and the rumen-boosting supplement monensin may be ideal during the dry period.

“Many producers use a ‘steam up’ approach where you gradually increase the energy intake during the dry period to help adjust the rumen and adapt the cow to greater feed intakes after calving. Our work has shown that’s really of questionable benefit for many farms, and it may be safer to just keep a constant level of feed intake before calving,” says James Drackley, professor in the Department of Animal Sciences at Illinois and co-author on a study published in the Journal of Dairy Science.

To test their hypothesis, the researchers fed cows either a controlled-energy diet throughout the dry period or a variable energy diet containing greater energy during the close-up period. The two diets made no difference in how the cows performed or in any of their metabolic indicators after calving.

“Obviously, it’s simpler if we don’t have to feed an additional diet halfway through the dry period,” Drackley says.

On top of the two feeding strategies, the researchers either added monensin to the prepartum diet or didn’t. The supplement is typically fed during lactation to make fermentation in the rumen more efficient and convert nutrients into milk proteins. Some producers take the supplement out during the dry period to give rumen microbes a “rest” period.

“Our research showed if we took monensin out during the dry period, then the cows produced about 2 kilograms less milk in the next lactation,” Drackley says. “The conclusion is it’s better to leave it in and prevent that lost milk production. I’d guess the majority of dairy farms in the Midwest are feeding monensin during lactation, so this should be a fairly relevant piece of information.”

The article, “Effects of prepartum diets varying in dietary energy density and monensin on early-lactation performance in dairy cows,” is published in the Journal of Dairy Science [DOI: 10.3168/jds.2020-19414]. Authors include Joel Vasquez, Maris McCarthy, Bruce Richards, Kelly Perfield, David Carlson, Adam Lock, and James Drackley. Funding was provided in part by Elanco Animal Health and the Illinois Agricultural Experiment Station, part of the College of Agricultural, Consumer and Environmental Sciences at Illinois.