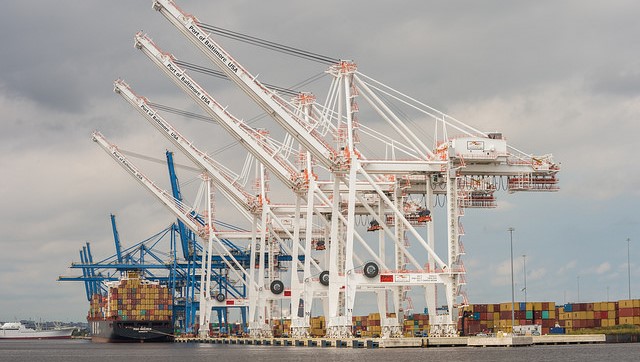 The Port of Baltimore is one of many ports in the U.S. involved in agricultural trade. (U.S. Department of Agriculture, Flickr/Creative Commons)

The U.S. Department of Agriculture today released additional details on its plan for up to $12 billion in assistance to farmers impacted by tariffs.

“I appreciate Secretary Perdue’s efforts to provide temporary relief to our hard-working farmers who are being affected by tariffs,” Roberts said. “However, with low prices across the board, our farmers need long-term certainty. They want the predictability of export markets over aid. The announcement on a preliminary agreement with Mexico is a critical step in the right direction. We also need to quickly finish our work on a bipartisan Farm Bill that contains programs that provide much-needed certainty and predictability for farmers, ranchers, growers, and other stakeholders in rural America.”

President Trump today announced that the U.S. and Mexico have reached a preliminary bilateral trade agreement.

“I thank President Trump for his work to improve trade relations with one of our top trading partners,” Roberts said. “I am eager to learn more of the details of the new U.S.-Mexico trade deal. The value of U.S. agricultural exports to Mexico has increased by 305 percent since NAFTA entered into force; farmers and ranchers need to be able to rely on that important market. I’m hopeful the Administration will move quickly on securing a beneficial trade deal with Canada in the coming days.”

From his post as both Chairman of the Agriculture Committee and as a senior member of the Finance Committee, which has jurisdiction on trade, Roberts has long been outspoken on the benefits of increased access to foreign markets for American farmers and ranchers – taking his concerns directly to President Trump, U.S. Trade Representative Bob Lighthizer, Commerce Secretary Wilbur Ross, and other high-ranking officials in the Administration on numerous occasions.

WASHINGTON — U.S. Department of Agriculture (USDA) Secretary Sonny Perdue today announced the details of the administration’s emergency aid package for farmers who are being targeted in an escalating U.S. trade war with China and other top trading partners.

USDA will send incremental payments to soybeans, sorghum, wheat, corn, pork, dairy, and cotton producers through the Market Facilitation Program starting on September 4. These payments will be based on their 2018 actual production and subject to payment limitations. The agency will also purchase commodities such as fruits, nuts, rice, legumes, beef, pork and milk through a Food Purchase and Distribution Program and authorize a $200 million Trade Promotion Program to develop foreign markets for U.S. agricultural products.

Rob Larew, NFU Senior Vice President of Public Policy and Communications, issued the following statement in response to the announcement of the aid package details:

“The USDA aid package is appreciated, and it will begin to help many of those that are suffering the brunt of the retaliation from China and other trading partners. But our family farmers and ranchers need strong markets and long-term certainty. This trade war has already caused irreparable, long-term harm to what were strong trade relationships for American family farmers and ranchers. As a result, farm prices continue to plummet for U.S. farm goods, and our competitors are putting more land into production to fill the void.

“Farmers Union wants to see the administration pursue fair trade agreements to the benefit of farmers and rural communities. But it must transition away from an ad hoc emergency aid strategy and to work with Congress to develop a legislative solution to low farm prices that keeps family farmers in business. While the current farm economy and outlook are bleak, the administration and Congress have the tools to protect family farmers over the course of this trade war.”

“The administration’s tariff mitigation package is welcome relief from the battering our farmers and ranchers are taking in the ongoing trade war. There is no doubt that the tariffs from nations like China have led to lower crop and livestock prices. This comes on top of nearly five years of falling commodity prices that have led to lower revenues and higher debt levels for farmers and ranchers. Nationwide, income is at a 12-year low, so any assistance that may help farmers is greatly appreciated: We lost more than 150,000 farms to consolidation and financial failure in the U.S. during the decade that ended in 2017.

“The additional burden of tariffs on the goods we sell to China, Canada, Mexico and the European Union has been more than many farmers can bear. Today’s aid announcement gives us some breathing room, but it will keep many of us going only a few months more. The real solution to this trade war is to take a tough stance at the negotiating table and quickly find a resolution with our trading partners. If we’re going to turn our farm economy around for the long-term, we need to open more export markets with fair trade deals, and the sooner, the better.”

WASHINGTON — U.S. soybean farmers reacted positively to the release by the U.S. Department of Agriculture of details for a plan to offset the short-term impact of tariffs on U.S. agricultural exports, including a 25 percent duty imposed by China on soybean imports. The package includes a Market Facilitation Program that will make payments to producers of soybeans and six other farm commodities to partially offset the impact of tariffs on their 2018 production, a program to increase USDA purchases of various impacted U.S. agricultural products, and a Trade Promotion Program to develop foreign markets for American agricultural exports. In response to the announcement, the American Soybean Association (ASA) released the following statement:

“We welcome USDA’s announcement that soybean farmers will receive a payment on their 2018 production to partially offset the impact of China’s tariff on U.S. soybean imports,” said ASA President John Heisdorffer, a soybean producer from Keota, Iowa. “This will provide a real shot in the arm for our growers, who have seen soybean prices fall by about $2.00 per bushel, or 20 percent, since events leading to the current tariff war with China began impacting markets in June.” Heisdorffer explained, “This assistance will be particularly helpful to farmers who didn’t forward-contract their crop earlier this year and who need to arrange financing for planting next year’s crop.”

The expected value of the 2018 soybean crop has been under increasing pressure ever since tariffs were imposed first by the U.S. and then by China on July 6. In the last two months, USDA has raised its estimate for soybean production in 2018 to a record 4.6 billion bushels, reduced its estimate for soybean exports in the 2018-19 marketing year by 230 million bushels, and projected an 82 percent increase in soybean carryover stocks to 785 million from 430 million bushels by September 2019.

Heisdorffer also emphasized that, “ASA strongly supports USDA’s initiative to provide an additional $200 million to develop foreign markets through a Trade Promotion Program. Increasing funding for market development has been a top ASA priority for this year’s farm bill and is even more critical given the need to find new export markets for U.S. soy and livestock products.”

“While this assistance package will definitely help our farmers get through the bad patch we’re currently facing,” Heisdorffer continued, “we must remain focused on market opportunities in the long term. Indications that the NAFTA negotiations with Mexico are heading toward a successful outcome are also welcome news for U.S. soybean farmers.” Heisdorffer added that, “We hope a new NAFTA will build on the original agreement for U.S. soy and livestock product exports and that Canada will soon join the pact.”

The ASA President concluded that, “Finalizing NAFTA will set a precedent for additional Free Trade Agreements that we need to replace part of the soybean market we are losing in China. ASA will continue to encourage the Administration to find ways to address our Nation’s trade deficit by increasing exports, including in the agriculture sector.”

China was the number one export market for U.S. soybean growers in 2017, importing 31%, or nearly one in every three rows of total production, equal to 60% of total U.S soybean exports.

WASHINGTON — The National Corn Growers Association (NCGA) today said plans unveiled by the U.S. Department of Agriculture (USDA) to provide aid to farmers negatively impacted by trade tariffs and ongoing trade uncertainty would be insufficient to even begin to address the serious damage done to the corn market because of the Administration’s actions.

The organization reiterated its call for the Administration to rescind tariffs, secure trade agreements and allow for year-round sales of higher blends of ethanol; no-cost actions that would allow for the marketplace to drive demand.

“NCGA members had a spirited debate on the prospect of trade aid during last month’s Corn Congress meeting,” said NCGA President and North Dakota farmer Kevin Skunes. “While most members prefer trade over aid, they support relief if it helps some farmers provide assurances to their local bankers and get through another planting season. Unfortunately, this plan provides virtually no relief to corn farmers.”

According to an NCGA-commissioned analysis, which NCGA provided to USDA and the Office of Management and Budget (OMB), trade disputes are estimated to have lowered corn prices by 44 cents per bushel for crop produced in 2018. This amounts to $6.3 billion in lost value on the 81.8 million acres projected to be harvested in 2018. USDA’s plan sets the payment rate for corn at just one cent per bushel.

“NCGA has understood from the beginning that this aid package would neither make farmers whole nor offset long-term erosion of export markets. But, even with lowered expectations, it is disappointing that this plan does not consider the extent of the damage done to corn farmers,” Skunes said. “Once again, we are calling on the Administration to settle trade disputes and support a strong Renewable Fuel Standard. These no-cost, immediate actions would deliver a real win for rural America.”

WASHINGTON — Today, the U.S. Department of Agriculture (USDA) released details of the $12 billion package of aid to farmers hurt by retaliation resulting from the U.S. tariffs on Chinese goods. According to the USDA press announcement, assistance to wheat growers will be 14¢/bushel. NAWG President and Sentinel, OK wheat farmer Jimmie Musick made the following statement:

“In public remarks last week, USDA Secretary Perdue stated that the federal aid package for farmers being harmed by our current trade war with China won’t seem like it’s equitable. This was made clear today when the Administration introduced a proposal which poorly reflects the reality that all farmers are being harmed by tariffs.

“About half of all U.S. wheat is exported, making new trade deals and establishing new global markets, a priority for all wheat farmers. As a result of the tariffs, China hasn’t purchased any wheat from the United States since March. Further, we estimate that the ongoing trade war will cause a 75¢/bushel price decrease and a reduction in global wheat production.

“U.S. Wheat Associates makes a similar note in their statement, which NAWG supports. The federal aid package invests in market development programs which we hope will repair some of the damage resulting from the tariffs. However, this solution is only temporary, and both organizations encourage the Administration to must move forward with new trade deals.

“Farm income is down, and rural America is enduring a prolonged economic downturn. This relief package shows that the Administration isn’t grasping the tough conditions being faced by farmers. The long-term solution is to end the trade war.”