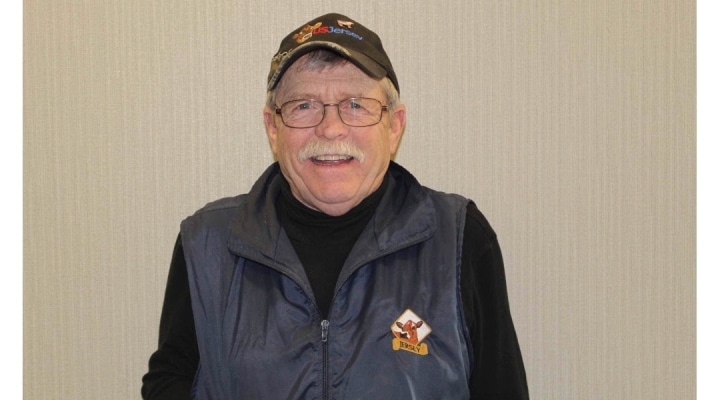 Ron Mosser's knowledge of the USJersey programs and organization is recognized internationally as he has been asked to teach other countries about the AJCA’s type trait appraisal program on numerous occasions. (Courtesy Photo)

Mosser recently completed 20 years of service with the USJersey organizations, having started work January 7, 2002, as a type traits evaluator for the American Jersey Cattle Association and National All-Jersey Inc. He was promoted to Senior Appraiser and Area Representative in August 2008. Ronnie has a lifelong experience in the dairy industry as a breeder of Registered Jerseys.

Since joining the AJCA staff in January of 2002, Ron Mosser has appraised more than 158,700 Jersey cows over this time period.

He will continue with the association as a part-time appraiser after March 1.

The ever-energetic and excited Ron Mosser has worn many hats in his full-time career with the USJersey organizations – ringman for shows and sales across the country, international judge, and cow-side training for USJersey appraisal team. He is the face to many when they think of the All American Jersey events as Mosser has been a constant presence as a ringman for the Jersey breed’s national shows and sale.

His knowledge of the USJersey programs and organization is recognized internationally as he has been asked to teach other countries about the AJCA’s type trait appraisal program on numerous occasions.

“Ron prided himself on being a representative for Jersey breeders all over North America,” said Kristin Paul, Director of Field Service for the American Jersey Cattle Association. “His reputation as an outstanding breeder and cowman and his enthusiasm for Registered Jerseys helped him earn the respect of breeders worldwide.”

Ron and his family own and operate Pleasant Ridge Jerseys in Indiana. Ron enjoys spending his summers on the fair circuit with his grandchildren sharing his enthusiasm for the breed with them.

Ron has served the Indiana and Kentucky Jersey breeders as their field representative many years. As he transitions to a part-time appraiser, his field territory has been reassigned between Jason Robinson and Greg Lavan.

Jason will be assuming Kentucky and West Virginia along with his Deep South states spanning from Virginia to eastern Texas. Greg has added Indiana and Pennsylvania, (west of I-79) to his current territory of Michigan and Ohio.

The American Jersey Cattle Association, organized in 1868, compiles and maintains animal identification and performance data on Jersey cattle and provides services that support genetic improvement and greater profitability. Since 1957, National All-Jersey Inc. has provided services that increase the value of and demand for Jersey milk and milk products and Registered Jersey™ cattle and genetics. For more information on AJCA and NAJ services for dairy business owners, visit the website at www.USJersey.com or connect at facebook.com/USJersey.

3 tips to keep in mind this calving season