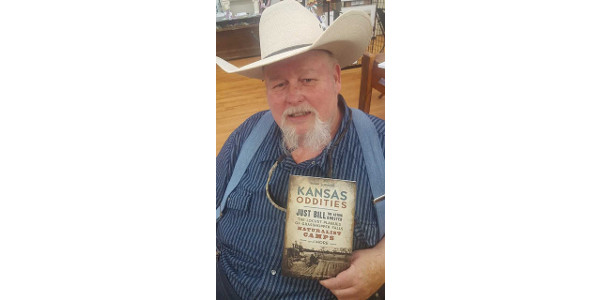 Roger Ringer is author of the book “Kansas Oddities – Just Bill the Acting Rooster, the Locust Plagues of Grasshopper Falls, Naturalist Camps and More.” (Courtesy of K-State Research and Extension)

MANHATTAN, Kan. — “Kansas ranchgirl” and “Turkish princess” are probably not the first words one would associate together, but in the 1920s these came to refer to one and the same person.  Then there was the Kansas rooster who became a movie star in the 1940s, appeared in Life magazine, and was insured by Lloyd’s of London. These amazing stories and many more are shared in a new book by rural Kansas author Roger Ringer.

“People have been telling me interesting stories all my life,” Roger said. “As I’ve shared those stories with others, people told me I should write a book.”

Beginning in 2013, he finally took time to do so. “Every time I did research on one story, I’d come across two or three more,” he said. “Often the local people were not aware of the remarkable history in their own community.”

In spring 2018, his new book was released by History Press. Kansas Oddities chronicles remarkable stories from all over the state, described as “eccentric tales celebrating independence and ingenuity.”

“We are a state of firsts,” Roger said. The first patented helicopter is an example. Several types of cars, tractors, threshing machines, boats, and other manufactured products were first designed in Kansas and are described in the book. “Those farm boys were out there thinking, `how can I do this easier?’” Roger said. “The motto for many of those entrepreneurs was, `if you needed something and you couldn’t afford to buy it, you just built it.’” This resulted in several innovative backyard prototypes.

Kansas people are highlighted. One unusual example is Sidia Wirt who grew up on a ranch near Garden City and went to KU. She performed music in New York and became a Hollywood socialite.

A Brazilian count asked to marry her as did a newspaperman in Hutchinson, Kansas.  According to legend which she never confirmed nor denied, a coin toss decided whom she would marry. The newspaperman won the coin toss but lost the war. They married, but after a few weeks, she informed him that he was not keeping her in the lifestyle she expected so she left him for Los Angeles.

Later she married a Turkish prince and literally reigned over a mansion in Constantinople, but again the marriage didn’t last. She moved back to the U.S., married an Army aviator and withdrew from the social scene.

Then there is the story of Just Bill the rooster. Stafford County businessman Earl Kelly bought Just Bill from Nebraska for $100, a goodly sum in 1946. Just Bill beat hundreds of competitors from 40 states to be named grand champion rooster at an Oklahoma poultry show sponsored by RKO film studio. He won a large trophy and a movie contract – I am not making this up – and became the RKO trademark rooster, crowing on the newsreels that preceded the movies in theaters. Earl Kelly insured Just Bill for $1,000 from Lloyd’s of London.

Each vignette in the book is short and readable, covering urban and rural Kansas.  Stories range from the formation of the Orient Railroad in Kansas City to the invention of the bulldozer in the rural community of Morrowville, population 155 people. Now, that’s rural.

“This book is necessary to keep these stories from being lost,” Roger said. “What hurts is the stories I couldn’t get in. I have enough for another twelve volumes.” His current book is available from Sam’s Club, Costco, Barnes & Noble and Amazon.

Kansas Oddities makes for fascinating reading. We commend Roger Ringer for making a difference by capturing and sharing these quirky but true stories of Kansas history. He makes oddities interesting.