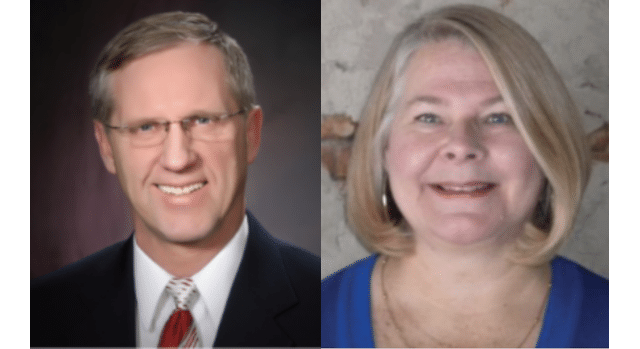 Roger Johnson and Sue Arends were presented with the Meritorious Service Award to Farmers Union and to American Agriculture. (Courtesy Photos)

“Roger and Sue spent their lives and careers bettering life for American farm and ranch families and their communities,” said NFU President Rob Larew. “It is important to celebrate champions for family farmers and rural communities and to honor these individuals in particular for their service. I am proud to recognize their contributions with our organization’s highest honor, the Meritorious Service Award.”

Roger and Sue join past recipients of the Meritorious Service Award, including former Members of Congress and a former United States President, who have made particularly noteworthy contributions to family agriculture, humanity, and Farmers Union at the state and national levels.

Roger Johnson provided National Farmers Union with strong and stable leadership during his tenure as president from 2009 to 2020. His leadership began in Farmers Union as a Torchbearer and he brought his philosophical commitment to the ideals of Farmers Union with him through other endeavors, including service as North Dakota’s commissioner of agriculture. Roger’s care for rural communities and agricultural professions has been evident throughout his life.

As president of National Farmers Union, Roger Johnson shepherded the organization through a variety of changes that ultimately put it on more solid financial footings and strengthened the Farmers Union brand. As a third-generation family farmer from Turtle Lake, N.D., and having graduated from North Dakota State University with a degree in agricultural economics, Roger’s broad and deep knowledge of the practicalities of farming and of agricultural policies and programs was a great asset to the organization in its legislative, educational, and cooperative work; he was uniquely well-versed in his advocacy for family farmers, their livelihoods, and their rural communities. Roger also prioritized Farmers Union’s commitment to the international community of farmers through NFU’s work with the World Farmers Organization.

Sue Arends has had a lifetime of involvement in Farmers Union and has demonstrated a deep commitment to the organization’s values, members, and board of directors. Sue grew up in a Farmers Union family in North Dakota, then spent the early part of her career with Rocky Mountain Farmers Union. She was hired by National Farmers Union in 1987, where she spent the remainder of her professional career until her retirement in 2019. In her work with Farmers Union colleagues and NFU’s board of directors, Sue provided not only an extensive knowledge of the organization and a careful watch over critical records, but also a warm and welcoming presence for newcomers and old friends alike.

General session and panel discussions will be live streamed on NFU’s Facebook page at facebook.com/nationalfarmersunion. More information on convention programming can be found at nfu.org/convention. Follow along using the hashtag #NFU2022. Download the NFU Convention app here for more information.

Get jazzed in New Orleans for the 2023 Cattle Industry Convention