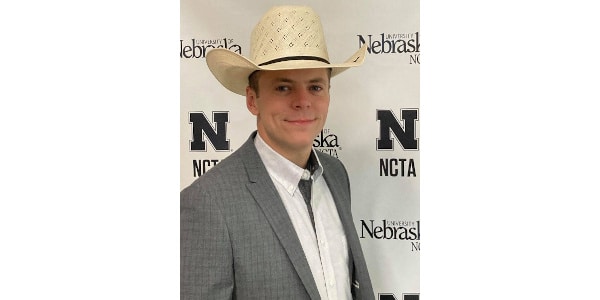 CURTIS, Neb. — Jaden Clark knows well the sport of rodeo across Nebraska, western states and even in the arena of the Calgary Stampede.

The native of Wellfleet has joined the Nebraska College of Technical Agriculture here in Curtis as coach of NCTA Aggie Rodeo.

“I’m looking forward to this opportunity to further build Aggie Rodeo, and in education at the collegiate level,” said Clark.

As youngsters, Jaden, his brother, Wyatt, and sister, Madison, followed in the path of their parents and three generations of Clark relatives with roots firmly immersed in rodeo and ranching.

Jaden Clark competed at national finals rodeos three times as a student at Medicine Valley High School in Curtis. He also held a leadership position as a student event director.

He majored in criminal justice with a minor in history.  “My favorite topics to study in college were Corrections, Western European History, and Russian Language,” Clark says.

Clark knows the challenges facing college athletes with studies, fitness, practice, finances, and responsibilities of caring for livestock and horses.

“Coach Clark’s skills in rough stock and team roping events, coming from a well-known rodeo family in the area, and his strong leadership and life experiences are motivating for student athletes,” said Larry Gossen, dean of NCTA.

“I was able to talk to students who are interested in Aggie rodeo, and at Hastings saw many students, parents and stock contractors,” said Clark, 27. “I got a good feel for who’s out there, for kids and talent.”

Aggie who meet academic and team requirements are eligible to travel both semesters. NCTA is in Great Plains region of the National Intercollegiate Rodeo Association. The Fall schedule is not yet posted.

“I see Wyatt and I being able to consolidate our resources and networks (such as with stock contractors) to greatly benefit both of our teams in the coming years,” Jaden said.

He has proposed an idea for Aggie fundraising. In early evenings after practice, the Aggie team might host a few public round robin jackpot ropings. Logistics might be ready when Aggie classes start August 23.

This summer Clark splits his time tending to agricultural work, commitment to the Nebraska National Guard, and entrepreneurship in Curtis. He and his father, J.R. Clark, have an insurance and real estate business, and Jaden recently purchased and re-opened the carwash downtown.

In July, Clark will attend advanced training with a cavalry regiment of the Nebraska National Guard. He serves in a motorized unit which patrols and performs reconnaissance.

He joined the Guard in 2020, he said, to combine his interests in working outdoors, broadening his life experience, and a desire for public service and duty to Nebraska and the nation.

Clark’s part-time duties at NCTA may expand into another new experience, in teaching an agricultural class, Gossen said.

In addition to coordinating practices, Clark will travel to team rodeos (unless at Guard duty) and is responsible for recruiting and coordinating sponsorship partners.

For the past two seasons, J.R. Dack served as rodeo coach. He assisted Gossen in navigating the team through COVID-19 protocols which allowed the Aggies to travel to seven rodeos last season, as well as Nathan Burnett’s efforts to qualify and compete at the CNFR in Casper in June.

“NCTA is greatly appreciative of the fine work and long hours of commitment put in by J.R. to coach our students,” Gossen said. “We realize that he spent many hours away from his family and business to see Aggies like Nathan succeed and enjoy collegiate rodeo.”

For information about Aggie Rodeo or academics, see ncta.unl.edu or email Coach Clark at jclark56@unl.edu.