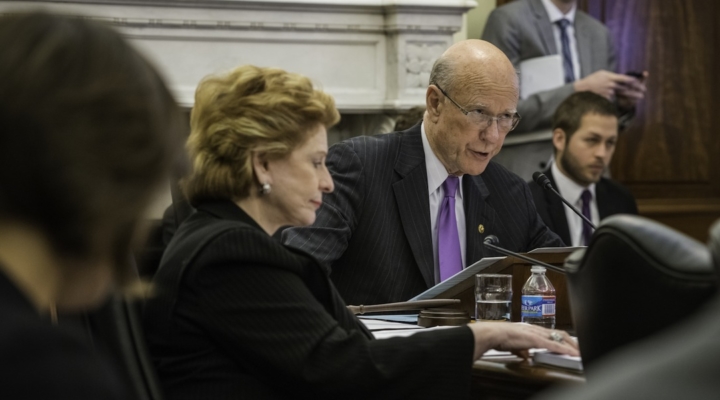 “With USDA’s wise decision to withdraw this rule, organic livestock and poultry producers can rest assured that they will not be forced out of business by another costly and burdensome regulation,” said Roberts. (U.S. Department of Agriculture, Flickr/Creative Commons)

WASHINGTON — After years of challenging the rule, U.S. Senator Pat Roberts, Chairman of the Senate Committee on Agriculture, Nutrition, and Forestry, today applauded the U.S. Department of Agriculture’s (USDA) announcement of a proposed rule that would withdraw a controversial regulation that would have revised organic livestock and poultry production standards.

“With USDA’s wise decision to withdraw this rule, organic livestock and poultry producers can rest assured that they will not be forced out of business by another costly and burdensome regulation,” said Roberts.

“Having fought this unwanted and unneeded regulation from the beginning, I’m pleased to see the Trump administration listening to my concerns, along with the concerns of organic livestock and poultry producers across the country. Together, we warned USDA of the unintended consequences of this rule, but our concerns fell on deaf ears in the previous administration. The rule was finalized two days before leaving office, despite its serious potential to force organic livestock and poultry producers out of business, increase prices paid by consumers for organic food, and increase animal disease and mortality. By withdrawing this rule, the Trump administration is again demonstrating its commitment to de-regulate rural America.”

Chairman Roberts has consistently opposed this rule and other onerous regulations that increase the paperwork burden and drive up the cost of production for farmers and ranchers. Under Chairman Roberts’ leadership, the Senate Agriculture Committee held a hearing in May 2016 on the U.S. livestock and poultry sectors, which included testimony from a variety of producers. That same day, Chairman Roberts successfully led a bipartisan, bicameral request to extend the public comment period for this rule. In July 2016, Chairman Roberts led a bipartisan coalition of Senators in sending a second letter to the Obama administration USDA requesting additional information on producers’ concerns over the rule.

New data on soil lost due to water