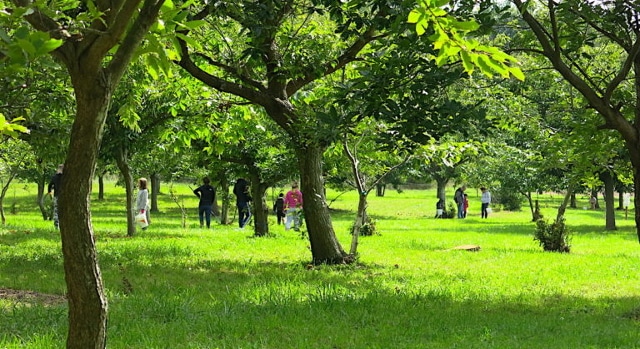 The u-pick season at Winkel Chestnut Farm is always a busy time of year. Leslie Winkel describes it as a family event, where children run around picking up nuts from the ground. (Image courtesy of Dick Winkel)

WASHINGTON — When Americans hear the word chestnuts, they might conjure images of snowy, holiday evenings and roaring fires. But for most of the world, chestnuts are part of the daily diet. Cooks in some countries use the nut as a starchy substitute, while others treat chestnuts as an ingredient in decadent desserts.

This global demand means that chestnuts are a growing industry. The market is clamoring for the nut, with sales projected to increase by 2.2%  annually over the next five years. While 27 countries around the world grow chestnuts, the United States has largely ignored the crop.

In a new report, the Savanna Institute outlines the potential for new chestnut farms to sprout up in the United States, providing a valuable crop for farmers. But beyond cutting a share of the $5.4 billion annual market, planting chestnuts on American soil is also beneficial in other ways: the report outlines the benefits of growing chestnuts in agroforestry systems, which include diversification of farmers’ crops, carbon sequestration that cools the climate, wildlife habitat creation, and slowing soil erosion.

Since current supplies are far below the demand, some smaller-scale chestnut farms have been popping up throughout the Midwest and Eastern U.S. as private businesses clamor for the nut. The new Savanna Institute report aims to guide farmers into the market, providing information on how to best transition agricultural land to the perennial tree crop.

Chestnuts are a temperate nut that can grow in many parts of the world, including the U.S. where the trees (Castanea dentata, C. ozarkensis and C. pumila) are native. Chestnuts trees are tall, fast-growing, and produce wood that’s perfect for building. They also provide nuts for humans and livestock alike: they were “a perfect tree” in colonial America, but a fungal blight almost eradicated the chestnut by the early 1900s.

The chestnut may have undergone some historical challenges, but it’s now being seen in a new light. “[Chestnuts] are unique in several respects,” said Bill Davison, program manager for tree crop commercialization at the Savanna Institute, and lead author of the new report. They produce nuts every year, for example, while other trees produce every other year, or even more sporadically. “The nuts are protected in a spiny bur, so they suffer less predation when they’re on the tree,” Davison said.

This combination makes the tree a hardy annual producer, Davison explained, noting that chestnuts can produce for decades. On a recent visit to a 30-year-old chestnut orchard, Davison talked with the farmer and got a surprise. “You know it takes [chestnut trees] about eight years or so to really start producing, but from year eight on, he told me they’ve produced a good yield every year for the past 20 years,” he said. “It’s pretty remarkable when you think about it.”

Long on demand, short on supply

Over centuries, scientists have been grafting chestnut trees to increase yields, hardiness, and blight resistance. The new cultivars can now be grown in an expanded territory in the U.S., extending to fields in the Midwest.

Despite these advances, chestnuts haven’t taken off as a marketable crop in the U.S. Why the resistance? It’s complicated, said Davison. “[When] we settled this huge country, we had all this fertile soil; it was relatively easy to start growing annuals and plants like corn did remarkably well.” He added that as a country we became enamored with row cropping, and tree crops were marginalized.

Perennial chestnut trees are an excellent addition to agroforestry systems. During the first few years, annual crops can still be grown between the rows of chestnut trees. Davison notes that the trees can also be planted in groves or incorporated into the farm in a more spacious layout.

“You can vary the spacing of your chestnut trees so you can grow your [annual] crops,” he said, keeping the benefits of a perennial crop while maintaining some of your other harvests. This type of planting, called alley cropping, can be used with many perennial crops, including hazelnuts, pecans, or fruit trees and bushes.

The tall chestnut trees are also prolific at capturing and storing carbon. When the trees mature, the woody biomass can sequester more than 8 tons of carbon per acre (about 20 tons per hectare). All the while, those roots are stabilizing the soil, capturing excess nutrients and reducing pollution of surface waters.

Despite the prime growing conditions in the U.S., only about 1,600 farms grow chestnuts on a scant 4,200 acres (1,700 hectares). That accounts for less than 1% of the world’s chestnut crop. Most of those farms are in Michigan, and many are open to the public. A quick internet search can reveal farms in your area, and when you can pick the brown, shiny nut.

One of these farms is Winkel Chestnut Farm, in Coopersville, Michigan. Owners Dick and Leslie Winkel talked with Mongabay over the phone about how their chestnut foray began: it all started in 1990, with an article in a Detroit newspaper, a day trip to Traverse City, and a crockpot snack break.

“There were some people up near Traverse City who were promoting growing chestnuts as another tree crop to help the cherry growers,” Dick said, adding that cherries can be a real boom-and-bust industry. Chestnuts were seen as a possible crop to buffer farmers’ bottom lines.

So he went to an informational meeting with a number of other Michigan farmers to learn more. “It was a real statewide education thing that happened and over the course of that one-day presentation I learned things about chestnuts which I had never seen or heard of before,” he said. “Then they served some chestnuts in a crockpot, so I got [a] taste of a chestnut. And my impression was, ‘My gosh, these things are pretty good.’”

He was sold. Dick and Leslie Winkel bought and planted chestnut trees on their land over the next few years, but the learning curve was steep. “The trees were starting to die behind me pretty quickly as I planted them,” Dick said. Over the years, Leslie noted that they learned a lot about growth and production.

“He started out with seedling trees and along the way he learned that the best way to get good production and good-quality nuts was to graft the trees,” she said. Like apples, trees tend to produce more and be more reliable when trees are grafted to known varieties.

Today, Winkel Chestnut Farm is a u-pick operation. When the farm opens to the public, people from all over, even neighboring states, visit for chestnuts. “During harvest time, it’s like a little U.N. out there,” Leslie said. People from European or Asian countries are familiar with chestnuts and flock to the farm for harvest. But Americans have been picking as well; Leslie noted that they just need a bit more education about how to use chestnuts.

The Winkel farm has also sprouted a secondary industry: tree nursery and grafting supplies. “We sold trees to some farmers, but to my surprise, there’s been an equal audience among people who want chestnuts out there in the countryside to attract deer for hunting,” Dick said. He added that in their own orchard, white-tailed deer frequently munch on the fallen nuts.

But with global demand, Davison said that “right now there’s more demand than supplies … for people that are growing chestnuts, it’s a really nice situation to be in.”

Leslie Winkel concurred, adding they get calls from people looking for 1,000 to 3,000 pounds (450 to 1,360 kilograms) of nuts, but “we don’t have the crop to satisfy that market at all.” She added that last year during the wildfires in the West, growers on the coast lost their crops, driving the demand even higher.

“There’s also a growers’ cooperative in Michigan where growers can bring their chestnuts and they market them, but they never have enough chestnuts to satisfy [the demand],” Leslie said.

Groups like the Savanna Institute are trying to change that trend, since adding chestnuts to farms provides both income and also a boost the health of the land. In their report, experts identified bottlenecks, including addressing the lag time between planting and harvests (roughly five to eight years), and making harvesting and processing methods easier.

They’ve also been working on spreading the word about the benefits, both environmental and financial, of growing chestnuts. But local farmers who grow chestnuts are also making headway in their communities. Small-scale orchards are supplying chestnuts to local businesses or selling directly to chestnut aficionados. They are also sharing information on growing chestnuts with neighboring farmers, and sharing advice on how best to start an orchard of their own.

The Winkels note that growing chestnuts requires farmers to pay attention to the needs at their farm: where to grow, what to grow, and how to nurture the trees is all unique to your land. Today, Dick said, it’s much easier to get that information and advice to make a successful orchard. “As I look back 15 to 25 years, I don’t think we had the knowledge that we have available to us now,” he said.

Sarah Derouin is a freelance science writer who lives in Michigan. Follow her on Twitter at @Sarah_Derouin.

See related from this reporter: Nuts about agroforestry in the U.S. Midwest: Can hazelnuts transform farming?