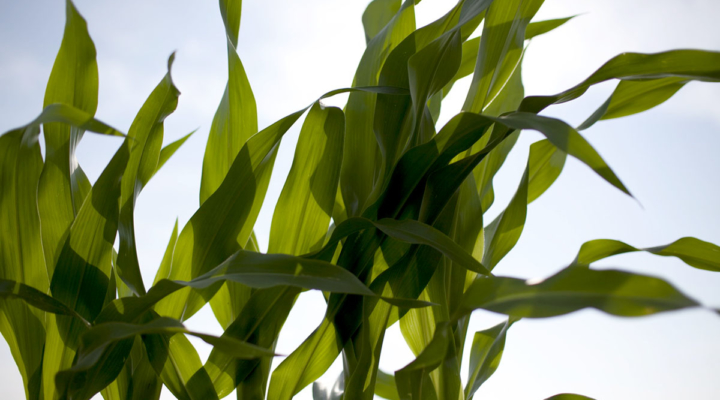 CHAMPAIGN, Ill. — Like atmospheric methane and carbon dioxide, ground-level ozone is on the rise. But ozone, a noxious chemical byproduct of fossil fuel combustion, has received relatively little attention as a potential threat to corn agriculture.

A new study begins to address this lapse by exposing a genetically diverse group of corn plants in the field to future ozone levels. The study, reported in the journal Global Change Biology, found that some members of the corn family tree are more susceptible than others to yield losses under high ozone air pollution. Discovering the genetic underpinnings of those differences could help plant scientists develop ozone-resistant corn, the researchers said.

“Ozone enters plants the same way carbon dioxide does: It diffuses from the atmosphere into the leaf,” said Lisa Ainsworth, a U.S. Department of Agriculture scientist who led the research with University of Illinois plant biology professor Andrew Leakey; University of Florida molecular genetics and microbiology professor Lauren McIntyre; and University of California, Davis plant sciences professor Patrick Brown. Ainsworth and Leakey are affiliates of the Carl R. Woese Institute for Genomic Biology and the Department of Crop Sciences at Illinois.

Carbon dioxide is a nutrient for plants, Ainsworth said. “All the carbon that ends up in the grain comes through the leaf first,” she said. But ozone is a highly reactive molecule that damages biological tissues and impairs photosynthetic carbon capture in plant leaves.

“Basically, ozone accelerates the aging of the leaf,” Leakey said.

Even background levels of ozone do some damage, Ainsworth said.

“Our research suggests that current ozone levels decrease corn yields by as much as 10%,” she said. “That’s as much as drought or flooding or any single pest or disease, but this is a relatively unstudied component of yield loss in the U.S.”

The researchers used the Free Air Concentration Enrichment facility at the U. of I. to track the real-world consequences of higher atmospheric ozone levels in an agricultural field. The FACE facility uses a sophisticated emission system that monitors wind direction and speed to dose a field with specific levels of a variety of gases, including ozone.

“The level that we’re fumigating to in this study is a level that is commonly found today in China and India,” Ainsworth said. “So, it’s not excessively high, even though we’re using a concentration that is 2 1/2 times the level of background ozone in central Illinois.”

The researchers planted 45 hybrid corn plants representing all the major types of corn – popcorn, sweet corn, dent, flint and others – to look for variation in their responses to high ozone levels. They found that some hybrids were more sensitive to ozone stress than others.

“We found two maize lines whose offspring were more sensitive to ozone pollution, regardless of which other types of corn we bred them with,” Leakey said. “Their genetic deficiencies manifested in different ways when exposed to the high ozone conditions.”

The genetics of commercial corn are a trade secret, so “we don’t know if these corn varieties have the same Achilles’ heels,” Leakey said. “Breeders would not know about these differences since they are not apparent under clean-air conditions.”

More genetic analysis and more experiments like those conducted at the FACE facility will be needed to determine how today’s plants will respond to future conditions, Leakey said.

“It’s important to understand how plants are going to respond to climate change before the climate changes,” he said. “That is the only way we can find the solutions that will be needed in the future.”

Want to keep a cow happy?