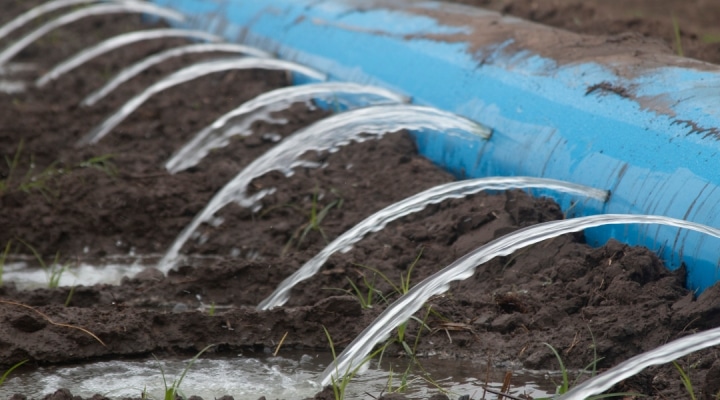 Irrigating with flexible piping, or “polypipe,” is one way that Rio Grande-area irrigators can be more water efficient with their irrigation. The polypipe can deliver water directly from the source to the furrows rather than lose water to deep percolation or evaporation which is common with earthen ditches. (TWRI photo by Lucas Gregory)

COLLEGE STATION, Texas — Technology can help farmers target their irrigation to the needs of the crop and the soil, thereby making them more water efficient – if it is adopted.

Researchers at the Texas Water Resources Institute, TWRI, a unit of Texas A&M AgriLife, recently completed a phase of research in the Rio Grande Coordinated Agriculture Project. The effort looked at area farmers’ use of scientific irrigation scheduling technology and what prevents some from adopting it.

“Irrigation scheduling is a science where we try to find out how much water is required at what time to achieve a certain crop yield goal,” said Ali Ajaz, Ph.D., Texas A&M AgriLife Extension Service program specialist for TWRI and investigator on the project.

Ajaz explained that few farmers use scientific irrigation scheduling technology. Instead, many farmers across the country, and in the Rio Grande region in particular, still use conventional ways of determining when to irrigate their crops. This can be anything from the feel of the soil, to visually assessing the condition of the crops, to irrigating when neighbors irrigate.

By contrast, scientific irrigation scheduling technology can integrate the use of soil and plant moisture sensing devices, weather data, computer modeling and other integrations of data into decision making.

“The survey generally asked about their irrigation scheduling methods and tools, what helps them decide when to irrigate and what factors influence their decision-making process,” Ajaz said.

“We also wanted to see what the main barriers are that hinder the adoption of these modern tools to make irrigation decisions,” Ajaz said.

While some of the recent findings line up with earlier findings about barriers to adoption of scientific irrigation technology broadly in the U.S., the research specifically quantified the perspectives of Rio Grande farmers.

“The Rio Grande region is quite unique,” Ajaz said. “The main reason is the majority of the area farmers rely on surface water supplies.”

Other barriers to adoption cited by respondents included concerns over the cost effectiveness of the technology, farmers’ lack of familiarity with modern irrigation scheduling tools, and associated concerns about potential reduced yields.

“Another major barrier was the uncertainty of future water availability, especially in the Rio Grande region where people have seen several droughts and also the climate change projections are not very promising for the region,” Ajaz said.

“Farmers are hesitant to invest in this technology because they are not sure what the water future looks like.”

Looking to the future of irrigation

The survey also showed that some respondents have already adopted scientific irrigation scheduling technologies. Some of the reasons for adoption were very future-focused.

“For a majority of growers, the biggest factor that pushed them to adopt some of this technology is to maintain the quality of their land,” Ajaz said. “They earn their livelihood from their land, so they are concerned for its quality.”

Salinity is an issue that makes farming and irrigating in the Rio Grande unique. Surface water from the Rio Grande can be very saline. When that water is used on cropland, the salts in the water get deposited into the soil. This can build up over time, rendering soil unsuitable for growing without mitigation efforts.

“If we can link crop-water-salinity production functions with scientific irrigation scheduling to help growers mitigate these issues, it is one big step forward for them and for us as AgriLife Extension experts,” Ajaz said.

Another encouraging motivator for adopting scientific irrigation scheduling technology that the survey suggested was the farmers’ idea of a duty to future generations. Ajaz called it sustainability awareness.

“We did the survey, and people do think that they are responsible at least to make sure that future generations get the water,” he said. “And now we have quantifiable evidence of that.”

Earlier this year, Texas A&M AgriLife helped TWRI create a series of informational videos as part of the Rio Grande Coordinated Agriculture Project. The series of eight short videos is aimed at Rio Grande irrigators to help raise awareness of both irrigation technology and informational resources available from AgriLife Extension.

The videos cover everything from the value of irrigation to Texas agriculture, to the state’s unique system of groundwater districts, to the advantages of irrigating with pipes rather than by flooding. The video series can be found online. 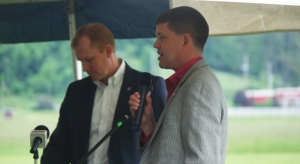