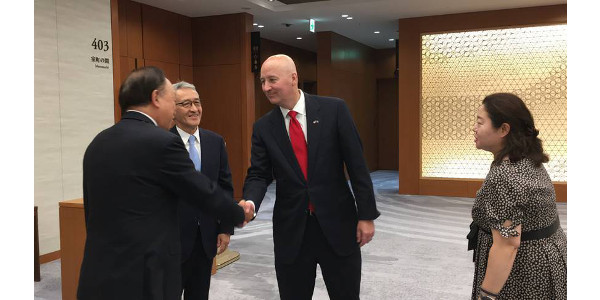 TOKYO, JAPAN — Monday, Governor Pete Ricketts met with Keidanren, a major Japanese business association, during his trade mission to Japan. During a working lunch meeting, Governor Ricketts and Japanese business leaders discussed the strategic economic and security goals at the foundation of the U.S.-Japan alliance.

In the afternoon, Governor Ricketts also met with the Japan External Trade Organization (JETRO). JETRO works to promote free trade between Japan and the U.S. along with increased direct investment.

These meetings follow recent a major announcement from President Donald J. Trump and Prime Minister Shinzō Abe of Japan. At the G7 Summit in France a few weeks ago, President Trump and Prime Minister Abe announced new measures to increase trade between the two countries, including reductions for beef and pork tariffs. More information about that agreement can be found by clicking here.

Earlier in the day, Governor Ricketts delivered an address at the opening ceremonies of the 51st Annual Midwest U.S.-Japan Association conference. During the address, he highlighted the $1.1 billion worth of products Nebraska exports to Japan annually as well as the 9,400 jobs created by Japanese companies in Nebraska.