Home » Richard Gray honored for his public service in forestry 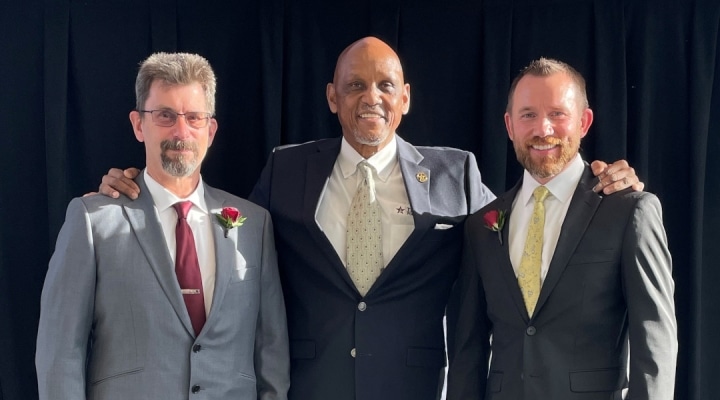 The Vice Chancellor’s Award in Excellence is the highest employee award given by Texas A&M AgriLife, and Gray received this award for his diverse and extraordinary contributions to Texas A&M Forest Service and to the state and people of Texas.

Through his 24-year career with Texas A&M Forest Service, Gray has served in multiple roles. He began his career in 1997 as an Urban Wildland Interface Forester in Conroe but quickly moved to Regional Fire Coordinator for the greater Austin area. Through this role, Gray was responsible for delivering various natural resource and wildfire programs throughout the region.

Today, Gray serves the agency as Chief Regional Fire Coordinator. Gray manages the delivery of many agency programs across the entire state and works with partners to review response and preparedness activities. He also provides operational advice to leadership and serves as the operations section chief on the Lone Star State Incident Management Team.

“Some of the most notable Texas A&M Forest Service incidents, restoration efforts, mitigation and prevention practices, partnerships, capacity building efforts and other situations have occurred under Gray’s watch,” said Moorehead. “He has been an undeniable leader in each, exhibiting expert decision-making and people skills.”

Gray has been the lead responder on countless wildfires throughout his career, though notably he lead response on the Bastrop County Complex, Hidden Pines Fire, LIT Ranch Fire and Dumas Complex.

Gray is also responsible for the initial Capital Area Interagency Wildfire and Incident Management Academy in Bastrop and has been instrumental in its continued success for the last 23 years. As a member of the Texas A&M Forest Service Leadership Enrichment Program, he also helped develop the New Supervisor Development Program – contributing to cascaded training – and helping to build the capacity of Texas A&M Forest Service leaders for many years to come.

“Gray’s experience, quiet leadership and ability to build the capacity of others make him one of the invisible driving forces behind so much of the agency’s success over the last few decades,” said Moorehead. “Often serving behind the scenes and during inopportune times and situations, his service, expertise and leadership are not unnoticed.”

As an established and critical leader at Texas A&M Forest Service, Gray’s work in innovative leadership program development and effective, strategic incident response has and will continue to help create a state agency incident response organization to which people want to belong.

“My number one priority is to ensure our response staff and the agency continue to grow our ability to meet the complexity of the changing wildland fire environment and the diverse all hazard incidents we are requested to manage,” said Gray.

Looking forward to the future, Gray says he is excited to see agency staff step up to the numerous challenges they are presented with each day and proud of their excellence in leadership.

“Simply put, it has been an honor and a pleasure to work for Texas A&M Forest Service,” said Gray. “After working for two other state forestry agencies, coming to Texas A&M Forest Service felt like coming home by proving opportunities, mentorship, guidance and more. I hope in return, I have made a positive impact from each of my positions with the agency.”

For more about the Vice Chancellor’s Awards, visit the full press release at: https://agrilifetoday.tamu.edu/2022/01/14/texas-am-agrilife-awards-personnel-across-the-state/.